The US Strategy In Syria Is Unraveling 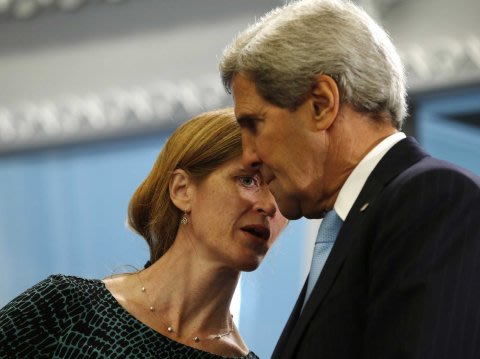 At about 4 p.m. ET, 13 of the largest Islamist brigades in Syria formed the “Islamic Coalition,” rejecting the Western-backed Syrian National Council (SNC) and the opposition’s planned exile government.

Two hours later the State Department wasn’t prepared to talk about the announcement, and instead discussed the Syrian coalition’s preparations for the upcoming Geneva II peace talks.

However, those plans were inherently muddled after ” nearly all armed factions that matter in Syria just issued statement saying [the] political opposition doesn’t represent them, ” as explained by Al Aan TV reporter Jenan Moussa .

Furthermore, the Syrian government also doubts the relevance of SNC leaders — meaning that the two strongest forces on the ground do not recognize the government-in-exile backed by the West, Turkey, Qatar, and Saudi Arabia.

Basically, the failure of America’s Syria strategy of building up moderate rebel forces to back a Syrian government-in-exile has left its plan in shambles.

The significance of the new rebel alliance arises from the fact that “swing Islamists” — rebels fighters with good relations with jihadi and moderate groups — appear to have chosen to side with more extremist factions.

Researcher and journalist Aron Lund explains that “i t represents the rebellion of a large part of the ‘mainstream FSA’ against its purported political leadership, and openly aligns these factions with more hardline Islamist forces.”

The Islamic Coalition announcement was read by the political leader of the Tawhid Brigade in Aleppo, meaning that the new alliance controls Syria’s largest city and much of the country’s north.

(Even the FSA’s Northern Storm brigade — a moderate group who was fighting the most extreme al Qaeda fighters last week near the Turkish border — issued a statement in support of the new coalition.)

In his U.N. speech, Obama urged tough consequences for Syria if it doesn’t comply with chemical weapons disarmament, adding that the agreement ” should energize a larger diplomatic effort to reach a political settlement within Syria. ”

Russia, which can veto any resolution, says it won’t support language that would trigger punitive measures if Assad fails to comply with the U.S.-Russian deal. And disregarding the SNC as a viable negotiating partner would be a nonstarter for America and its allies.

One thought on “The US Strategy In Syria Is Unraveling”