Alabama Home Brewing Bill In Works, But For Now State Is Only To Forbid Making Beer At Home 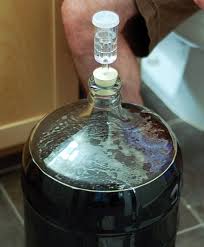 If you’re in a state where cousins can legally marry each other, but home brewers are forbidden to practice their craft, you must be in Alabama.

Indeed, Alabama now stands out as the only state where home brewing is illegal.Mississippi voted this week to legalize the hobby lager lovers and hopheads in America have enjoyed, even before George Washington and Sam Adams boiled up their first brews.

Alabamans don’t just get slapped with a ticket if they start mixing up a batch. It’s a felony.

But to a feisty band of Yellowhammer State tipplers, it’s ridiculous for the government to meddle with their malt. They won’t be satisfied until Alabama has the same rights enjoyed everywhere else in the country.

“This is not about alcohol. This is about civil liberties,” said Kraig Torres, owner of Hop City Craft Beer and Wine in Birmingham. “If I went around in Alabama and said, ‘you can’t have a gun in your house,’ I’m pretty sure people would be upset.”

Residents who want to buy shotguns, rifles or handguns don’t need permits, licenses or registrations. However, it’s unclear how regulations apply to gunsmiths who forge firearms in their residences.

Torres lives in Georgia and operates his flagship store there. While he’d like to sell beer-making ingredients and cookbooks in his Birmingham venture, he has gotten into trouble with the Alabama Alcoholic Beverage Control Board.

In September, before he opened Hop City, state agents inspected the store. Torres said they confiscated $7,000 worth of beer-making kits and cookbooks on a follow-up visit. A lawyer for the beverage control board told HuffPost that Torres removed them from the store after he was told they were contraband.

Alabama maintains a fervent temperance movement. It’s been 80 years since Prohibition’s demise, but there are 25 dry counties in the so-called “Heart of Dixie.” Some teetotalers there wish the libations had never started flowing again.

“We’re talking about a mind-altering, addictive drug,” said Joe Godfrey, a pastor and executive director of ALCAP, a group that opposes loosening any restrictions on alcohol. “This isn’t barbecue. People are killed on the highways. You hear all the time about people being killed under the influence of alcohol. You never hear about people getting killed by barbecue.”

Torres’ experience was a rare instance of the state enforcing the home-brewing ban, according to interviews with home brewers and an Alcoholic Beverage Control Board lawyer. Just this month, however, a prosecutor in Mobile County was disciplined for flouting the home brew restrictions, Al.com reported.

Home-brewing advocates said the felony status scares away some and forces others into the shadows even though the chance of punishment looks slim.

“Home brewers would like to be able to practice their hobby in the open. They have to be fairly secretive,” said American Homebrewers Association Director Gary Glass. “It just doesn’t make sense that it would be prohibited. Many of the Founding Fathers were home brewers including George Washington and Thomas Jefferson.”

Bills to legalize home brewing sit in both houses of the Alabama legislature awaiting a vote. It’s the third straight year legislators have proposed changes to the home brew law.

Partisan squabbling on unrelated issues may derail it again, according to observers and local media reports.

“We hope it passes so we can move onto more important business,” said Bob Martin, an ABC board lawyer. “We really don’t care. It’s a hobby. It’s not our real concern unless we found out someone was making it and selling it illegally. Generally, we’re not going to go into their homes.”

If passed, the bills would allow Alabamians to whip up limited quantities of intoxicating drinks like beer and wine. Liquor would remain off-limits. It would also pave the way for tasting events and competitions, advocates told HuffPost.

Home brewing was for outlaws and scofflaws throughout the country as a result of Prohibition until then-President Jimmy Carter signed a federal law decriminalizing the pastime in 1978.

“I’m going to have a pint with friends at our local bar in town and then open a bottle of home brew at home” to celebrate, said Craig Hendry, president of Raise Your Pints, a group that hired lobbyists to overturn the ban.

“We want to be talked about in a positive light, not as another state that was the last to do something.”

Editor’s note: To be fair to Alabama, 19 other states allow first cousins to get hitched too, according to the National Conference of State Legislatures.

3 thoughts on “Alabama Home Brewing Bill In Works, But For Now State Is Only To Forbid Making Beer At Home”