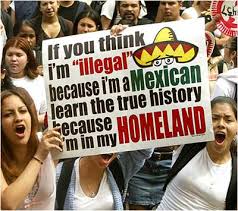 The 844-page immigration reform bill the bipartisan “Gang of Eight” dropped in the dead of night contains a lucrative handout that would give taxpayer-funded free cell phones to some people who live or work near the U.S. border with Mexico.

Pages 43 and 44 of the bill detail what one conservative blogger, Javier Manjarres of Shark Tank, has already described as the “ObamaPhone” from Sen. Marco Rubio (R-FL). That section reads:

Under current federal law and court precedents, racial discrimination is illegal — but there is no specific ban on racial profiling by federal officers.

Under the immigration reform bill, some employers would have an incentive of up to $3,000 per year to hire a newly legalized immigrant over a U.S. citizen.

In avoiding one controversy — the cost of providing millions of newly legalized immigrants with ObamaCare subsidies — the Senate “Gang of Eight” may have risked walking into another.

“It’s hard to believe, but the Senate immigration bill is worse than we thought. Despite assurances, the border is not secured before almost everyone in the country illegally is given amnesty.  The bill guarantees there will be a rush across the border to take advantage of massive amnesty.”

“And the Senate proposal offers amnesty to far more illegal immigrants than we thought.  In addition to most of the 11 million illegal immigrants already in the country, the bill offers to legalize the relatives of illegal immigrants outside the U.S. and even others who have already been deported back home. So current immigration laws are shredded. (Read More)

to attend college at an in-state tuition rate. According to The Associated Press, some of Colorado’s undocumented students had been paying more than three times higher than the rate in-state students pay.

The immigration bill introduced to the Senate a week and a half ago would, if passed, allow illegal immigrants to access state and local welfare benefits immediately, Breitbart News has learned. The financial impact of allowing potentially millions of immigrants onto state and local public assistance could overwhelm these programs’ budgets.

Senate Budget Committee ranking member Sen. Jeff Sessions (R-AL) uncovered this loophole in the bill and many others, and he will circulate a memo detailing the gaps in the bill on Tuesday. Breitbart News exclusively obtained a copy of the memo before its public release.

Millions of Americans suffered a loss of wealth during the recession and the sluggish recovery that followed. But the last half-decade has proved far worse for black and Hispanic families than for white families, starkly widening the already large gulf in wealth between non-Hispanic white Americans and most minority groups, according to a new study from the Urban Institute.

“It was already dismal,” Darrick Hamilton, a professor at the New School

in New York, said of the wealth gap between black and white households. “It got even worse.”

Given the dynamics of the housing recovery and the rebound in the stock market, the wealth gap might still be growing, experts said, further dimming the prospects for economic advancement for current and future generations of Americans from minority groups.

, and when more illegal immigrants go on food stamps JP Morgan makes more money.  As you will read about below, JP Morgan has made at least 560 million dollars processing Electronic Benefits Transfer cards.  Each month, JP Morgan makes between $.31 and $2.30 for every single person on food stamps (and that does not even include things like ATM fees, etc).  So JP Morgan has a vested interest in seeing poverty grow and the number of people on food stamps increase.  Meanwhile, the Obama administration has been aggressively seeking to expand participation in the food stamp program.  Under Obama, the number of people on food stamps has grown from 32 million to more than 47 million.  And even though poverty in America is absolutely exploding, that apparently is not good enough for the Obama administration.  It has now come out that the U.S. Department of Agriculture has provided the Mexican government with literature that actively encourages illegal immigrants to enroll in food stamps.  One flyer contains the following statement in Spanish: “You need not divulge information regarding your immigration status in seeking this benefit for your children.”  The bold and the underlining are in the original document in case you were wondering.  Overall, federal spending on food stamps increased from 18 billion dollars in 2000 to 85 billion dollars in 2012, and at this point one out of every five U.S. households in now enrolled in the food stamp program.  When people illegally or fraudulently enroll in the food stamp program, it makes it harder for those that desperately need the help to be able to get it.