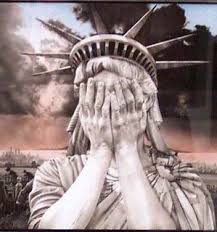 What does it say about our economy that at the same time the Dow Jones hits a peak, we have the highest percentage of Americans on food stamps?

It is a dichotomy that speaks to the current state of our economy.  Food stamp usage has peaked at the very same time that the Dow Jones Industrial Average is setting new highs.  Of course, the Dow is setting new nominal highs but still has a way to go to catch up to the eroding effects of inflation.

You have to really ask how is it possible that at a time where so much financial wealth is available that so many people, over 47 million people in our country, are relying on food assistance just to get by.  Where is all the wealth going?  The financial system has been propped up with trillions of dollars of bailouts and loan programs and has allowed the same kind of speculation that caused our serial bubbles to once again emerge.

Many people are speculating in places like Las Vegas and Arizona and crowding out your typical family simply looking to buy a simple home or find a rental.  The fact that we are facing a peak in food stamp usage and seeing a new high with the Dow is very telling in the sense that it shows that we are truly becoming a society with a smaller middle class.

We have never had so many Americans on food stamps as a percentage of our population:

The actual number is 47,791,966 Americans that now receive food assistance.  What the media does not convey is that the stock market is largely not a true indicator of health for the underlying economy.  Few Americans own any significant amount of financial wealth.  Most Americans rely on actual jobs to live and support their family.  Many of these companies are increasingly earning higher profits by slashing wages, cutting benefits, and earning profits from their business abroad.  What the press does not tell you is the standard of living for many Americans has moved backwards over the last few decades.  Median household income is now back to levels last seen in the mid-1990s.

To get food stamps is really no easy task.  You have to show that you are in poverty or on the verge of being in poverty.  The typical amount given each month is not large:

The typical amount given out is about $277 per month.  A corollary impact of this is that it has boosted company stock in places like Family Dollar and the 99 Cents Store.  The dollar economy is strong because it has  47,791,966 guaranteed customers and it seems that this figure has not gone back even though our recovery goes back to the summer of 2009.  Many dollar stores also have a surprising number of higher income households trying to stretch their dollars.

The stock market is not a good indicator for overall wealth of Americans.  Most Americans have their wealth in home equity.  So while net worth is heading back up near the peak, real estate values are still down about $5.5 trillion from their peak:

While overall net worth is nearing a top, the housing market is still down about 30 percent from its peak.  The price rise in real estate right now is being driven not by healthy household balance sheets but by large Wall Street funds scooping up whatever properties they can find to turn into rentals or flip projects.  They are crowding out your average American.  Net worth figures are still hampered for most because of the fall in real estate values.  But the recent rise seems to be spurred by hot money chasing another market which is exactly what set the foundation for the first housing bubble back in the early 2000s.

It should be an obvious question to ask by the press as to why it is that the Dow has peaked at a time when food stamp usage has peaked.  Yet there is little market or advertising dollars from the poor.  The dollar stores have their niche and reach out to this group but it is unlikely that they will spend big ad dollars to compete with debt based spending on cars or pharmaceutical ads.  We also have record debt at $16.7 trillion and you are seeing record speculation in the stock market with people underpricing volatility.  Not every peak is worth climbing.