A look at major U.S. military strikes as ordered by the last five U.S. presidents and the degree of international support behind the actions.

Senator Rand Paul, a Kentucky Republican and a fierce opponent of military action in Syria, will filibuster any effort to bring an authorization of military force to a quick vote in the Senate, a Paul aide confirmed Wednesday.

The decision likely will scramble the Senate schedule and could delay any vote of the Senate for days. House leaders want the Senate to move first to build momentum. But for the Senate to move quickly, the majority leader, Harry Reid of Nevada, would need unanimous consent at least to bring the authorization of force to the Senate floor.   END_OF_DOCUMENT_TOKEN_TO_BE_REPLACED 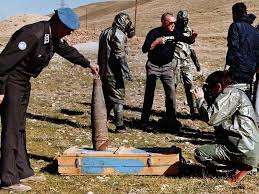 The Anti-Empire Report #120 – by Robert Blum

Secretary of State John Kerry: “There is no doubt that Saddam al-Assad has crossed the red line. … Sorry, did I just say ‘Saddam’?”

A US drone has just taken a photo of Mullah Omar riding on a motorcycle through the streets of Damascus. 1

So what do we have as the United States refuses to rule out an attack on Syria and keeps five warships loaded with missiles in the eastern Mediterranean?   END_OF_DOCUMENT_TOKEN_TO_BE_REPLACED

First, let me say something about the polarization I have seen surrounding the subject. Calling all who support military action “ignorant warmongers”, or all who oppose it “pro-genocide cowards” is not only an inflexible position, but one that is not conducive to a proper understanding of this –or any– sociopolitical conflict. I don’t practice that kind of name-calling, and hope you’ll refrain from it as well.

Robert McNamara, one of the main architects of the Vietnam war and the Secretary of Defense under Presidents Kennedy and Johnson, once said:   END_OF_DOCUMENT_TOKEN_TO_BE_REPLACED

If and when the United States government intervenes militarily in some way in Syria, there is no question that U.S. military personnel will take the lives and destroy the property of people that had never harmed an American or threatened the United States in any way.

And most Americans won’t even care.   END_OF_DOCUMENT_TOKEN_TO_BE_REPLACED 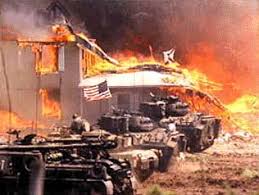 One point that needs to be made, but rarely if ever mentioned, is that in the supposed rationale for US attack on Syria to avenge/prevent claimed civilian deaths by government gas attacks, the US government itself has used similar weapons openly as recently as the FBI/ATF attack on the Branch Davidian compound near Waco Texas in the spring of 1993.

76 men, women and children died in this senseless military style assault which used highly lethal military CS gas as a primary weapon. CS is not a nerve agent and it doesn’t in normal concentrations cause immediate death. But it is highly flammable, persistent and designed to incapacitate targets by causing massive biological reactions including inability to breathe, massive tearing in the eyes, nose bleeds, etc.   END_OF_DOCUMENT_TOKEN_TO_BE_REPLACED

The other day, while driving home from the lovely Blue Ridge Mountains of western NC to the lovely upper Shenandoah Valley, it occurred to me that the metaphor of our time has been before us all my life.

Watch for falling rocks.  I do watch, but I’ve never seen it happen.  Sometimes, you see rocks that have fallen, and sometimes you see the debris after a rockfall cleanup.  But I personally have never yet seen the rocks actually falling.  Honestly, it’s on my bucket list.   END_OF_DOCUMENT_TOKEN_TO_BE_REPLACED