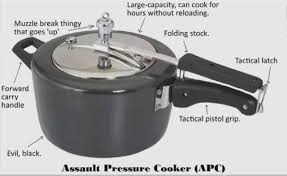 A bipartisan bill introduced on Monday will require background checks on pressure cooker sales and set limits on sales of nails and ball bearings.

House Bill 10-289, the ‘Pressure Cooker Prevention of Crime and Protection of Children Act of 2013’ (PCPCPCA) has already gained 391 sponsors spanning both of the two sides of the political spectrum, the Democrats and the Republicans.

However, despite the tragedy of April 15 in Boston, which killed three people including an innocent child, and injured hundreds including probably at least two dozen innocent, sweet little children, some politicians are actually opposing it.

“I know it’s a cliche, but I’m gonna say it again – if pressure cookers are outlawed, then only outlaws will have pressure cookers” said Senator Rand Paul, a noted rabble-rouser and suspected right-wing republican.

Other voices in Washington were more reasonable.

“I appreciate pressure cookers and the American pressure cooker culture” says Congressman Jack Slipjaw (D-South Dakota) “but the simple fact remains: nobody needs more than one pressure cooker, and nobody but a bloodthirsty terrorist needs one with greater than a 6-inch diameter. Background checks and a waiting period will save countless lives in the future, many of them innocent small beautiful children like that one that was killed in Boston.”

“The language in the bill is too vague” opined Rep. Randy Rootentooter (R-Hawaii). A 5-day waiting period for 6-inch wide pressure cookers, but a 7-day period for cookers 8 1/4 inches wide or greater? These designations are arbitrary, and any debate on them is just arguing semantics, except with numbers and fractions instead of words.”

A rider in the bill concerning the purchase of nails and ball bearings is also drawing criticism. Senator Sassy Grassstain, another republican politician from Alabama or Louisiana, may actually have her head screwed on straight. “We have taken many factors into consideration while considering the factors for sales of nails and ball-bearings, and have come to the logical conclusion that nails shorter than one inch cannot pierce vital organs and therefore will be allowed for sale without a nail-owner’s permit. Anything longer than that is a deadly weapon or at least a dangerous one if used by an unqualified person to do home repairs that should only be tackled by a professional. Furthermore, all purchases of ball bearings should be immediately eyed with suspicion. Think about it. When is the last time you’ve needed a box of ball bearings? Clearly only machine shops and terrorists need a whole box of deadly ball bearings.”

The bill is expected to pass the senate and be signed into law on Tuesday.