Bloomberg: Drones are here to stay and you’ll have less privacy. Deal with it 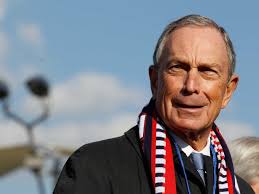 This morning, during his weekly interview with John Gambling, Mayor Michael Bloomberg was asked about the NYPD using domestic drones in the city.  Bloomberg’s answer is…disturbing.

Bloomberg claimed that he wasn’t taking sides on the issue. “It’s not a question of whether I think it’s good or bad, I just don’t see how you can stop that because we’re going to have them.”“We’re just going into a different world. Uncharted,” he said. “Like it or not, what people can do, or governments can do, is different and you can to some extent control [it], but you can’t keep the tides from coming in. We’re going to have more visibility and less privacy. I don’t see how you stop that.”

So, let’s get this straight.  The nanny-state mayor who thinks he can control the size of your sodas, overrule the 2nd Amendment, and eliminate cigarette displays in public, doesn’t see any way to prevent the NYPD from watching you via domestic drones?

Just a few weeks ago, Bronx Assemblyman Luis Sepulvedaannounced that he was drafting legislation that would severely curtail drone-spying in New York.  In fact, all across the country, laws are being considered that would either rein-in or outlaw the use of such devices.Mr. Mayor?  How ‘bout we outlaw it?You know, like a 2-liter of MountainDew?

Either Bloomberg doesn’t know this or – and this is far more likely – he just doesn’t care.

“Everybody wants their privacy but I don’t know how you’re going to maintain it,” the mayor says. “This is something that society really has to think about – and not by writing a quick piece of legislation. These are long-term, serious problems. Whether we have the discipline to approach problems that way, I don’t know.”

Well, there you have it.  Bloomberg’s decided that society doesn’t have the “discipline” to deal with the privacy issue, so we’d better just get used to having our privacy eliminated.

The fact of the matter is that LIBERAL society (the only kind Bloomberg understands) doesn’t have the DESIRE to maintain our privacy.  Besides, it’s going to be much easier for them to achieve constant control if you just suck it up, and learn to love the drones.

If you’re an old-fashioned sort who actually likes your privacy?  Tough.

Robert Laurie’s column is distributed by CainTV, which can be found at caintv.com

32 thoughts on “Bloomberg: Drones are here to stay and you’ll have less privacy. Deal with it”