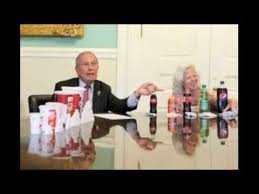 What’s good for the city would be good for the state, Mayor Bloomberg said yesterday, recommending that his ban on jumbo-sized sugary drinks be expanded beyond the five boroughs.

Under a new law that takes effect March 12, restaurants and other food establishments regulated by the city’s Health Department are not going to be allowed to sell sugary sodas in sizes larger than 16 ounces.

Supermarkets, grocery stores and even 7-Eleven shops would not be affected because they’re outside the Health Department’s jurisdiction and answer to a higher authority: the state.

When a reporter asked the mayor about this inconsistency — which allows consumers to buy all the 2-liter sugary beverages they want in supermarkets, but prohibits pizza shops from offering the same products for consumption off their premises — Hizzoner replied, “Why don’t you ask the question to the state, which regulates [grocery] stores?”

A few minutes later, he was even more blunt: “The state should do exactly the same thing in stores.”

The message seemed clear: The mayor wants Albany to level the playing field and impose the same policy he did on food stores under its control.

“There’s no beneficiaries if we allow pizza places to deliver more empty calories to kids and to adults,” he said. “But there are clearly benefits to society and everybody else if you go in the other direction.”

By late afternoon, the mayor’s office had issued a clarification. “The mayor believes our policy on sugary drinks in restaurants and food-service establishments is the right one and it will save lives, so, of course, he believes the rest of the state should adopt the same policy,” said mayoral spokesman Marc LaVorgna.

“He is not taking a position on what state government should do with grocery stores.”

Rob Bookman, counsel for the New York Nightlife Association, said his reading of the law is that the city can’t stop the delivery of sodas of any size as long as they’re not gulped down in the store.

Only one major mayoral candidate, Public Advocate Bill de Blasio, is siding with the mayor on the 16-ounce limit. Even Bloomberg’s ally, City Council Speaker Christine Quinn, is opposed, according to a spokesman.

“Without question, large amounts of these beverages are unhealthy, but a strong, bold education campaign could have prevented the backlash and some of the unintended consequences,” Republican mayoral hopeful Joe Lhota weighed in.