Bloomberg wants to reintepret the Constitution 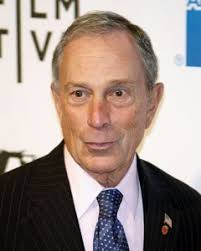 There is a special sort of sickness that infects those souls who come into money, power, or fame, that gives them the illusion that they are somehow better than the population at large, and that because of their extraordinary individual circumstance or fortune, they are then “experts” who may dictate to the masses what their God-given rights are, and how their lives are to be conducted.

Mike Bloomberg is one of these arrogant souls:

In the wake of the Boston Marathon bombings, Mayor Michael Bloomberg said Monday the country’s interpretation of the Constitution will “have to change” to allow for greater security to stave off future attacks.

“The people who are worried about privacy have a legitimate worry,” Mr. Bloomberg said during a press conference in Midtown. “But we live in a complex word where you’re going to have to have a level of security greater than you did back in the olden days, if you will. And our laws and our interpretation of the Constitution, I think, have to change.”

What Bl0omberg—and indeed many self-styled elitists—don’t grasp, is the simple fact that the Declaration of Independence, Constitution, and Bill of Rights aren’t just a bunch of  malleable words on parchment that can be twisted, warped, and stretched to fit the chosen agenda of today’s arrogant power brokers. The ideas behind those words give them context and substance, and we’re very fortunate to know precisely what the Founders meant because of the letters they shared among each other and to friends, in their speeches and contemporary op-eds that they published in Colonial newspapers, in the texts that they cited, and in the educations provided by the philosophers they respected.

Collectively, these founding documents are not mere collections of words, but the fixing (in a scientific, curational sense) of the ideas and philosophies that are the essence of the Revolution, a revolution in the hearts and minds of Americans that was never supposed to end, where every sacred liberty is jealousy guarded against a federal government that they wanted to have a minimal impact on the rights of the people. The Constitution and Bill of Rights do not tell us what we as citizens can do. On the contrary, they exist as restraining orders telling the government what it cannot do.

Elitists such as Bloomberg have been chipping away that that restraining order for more that 200 years, attempting to undermine it, corrupt it, and they clearly mean to discard it entirely, so that they can dictate to you what you may do/drink/eat/own/say/think.

They are pushing hard, and indeed, have managed to split the Republic into two radically different peoples within the borders of our nation within the past 60 years. The basic philosophies championing individual rights and civic duty cherished by my people are those ideas and ideals shared by the Founding Fathers. The philosophy of dictatorial control of the government over the people and every meaningful aspect of their lives is what Bloomberg and his allies are fighting for with all their might and power.

These philosophies cannot coexist beside one another, and one side or the other must triumph in a contest that is a force of will over the direction of this nation.

Chose your side, and determine for whom you will make your stand.

4 thoughts on “Bloomberg wants to reintepret the Constitution”