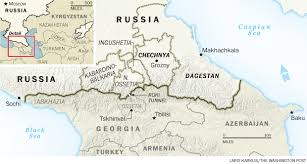 As Boston and U.S. security agencies congratulate themselves over the apparent neutralization of a pair of Chechens that [allegedly] bombed the Boston Marathon, troubling questions are beginning to arise.

First and foremost is, why a pair of Chechens, born in the former Soviet republic of Kyrgyzstan, apparently committed the attack?

For possible answers, one must looks beyond the present and delve into Russia’s and the USSR’s past policies towards Chechnya, and since 1991, U.S. policy in the Caucasus, which since the 1991 implosion of the USSR had a single focus – the exploitation of the Caspian’s massive energy reserves.

It is a history that makes for deeply uncomfortable reading, but one that may eventually provide some answers to seemingly intractable questions.

After Iran transferred Chechnya to the Russian empire under the Treaty of Gulistan following the 1804-1813 Russo-Persian War, Russian troops entered the region to assert control, resulting in a long-drawn out and bitter campaign marked by numerous atrocities until Imam Shamil surrendered to the Russians in 1859, causing many Chechen Muslims toemigrate to the Ottoman Empire. Following the 1917 Russian revolution, Chechnya suffered the travails of the rest of the Soviet population until 23 February 1944, when Stalin ordered Chechnya’s population deported en masse to Soviet Central Asia on suspicions of them being traitors and working with Nazi forces. In eight days, the People’s Commissariat for Internal Affairs (NKVD), predecessor to the Committee for State Security (KGB), forcefully deported 350,000 to 400,000 Chechens and 91,250 Ingush from the Caucasus, mainly to Central Asia, primarily Kazakhstan, but others as far as Kyrgyzstan and Eastern Siberia.

And many Chechens were swallowed up by the NVKD’s Gulag archipelago, but even there, their toughness and militancy set them apart. As Russian Nobel Prize winner Alexander Solzhenitsyn noted his is three-volume study, The GuLAG Archipelago, “There was one nation which would not give in, would not acquire the mental habits of submission – and not just individual rebels among them, but the whole nation to a man. These were the Chechens… They had been treacherously snatched from their home, and from that day they believed in nothing… The years went by – and they owned just as little as they had to begin with. The Chechens never sought to please, to ingratiate themselves with the bosses; their attitude was always haughty and indeed openly hostile.”

Fast forward to the 1991 dissolution of the breakup of the USSR.

Chechens subsequently fought two wars against Russian forces, the first from 1994 to 1996, and the second from October 1999 until early 2009, with both conflicts marked by violence and atrocities committed on both sides.

In 2007 Russian President Vladimir Putin appointed Ramzan Kadyrov Chechnya’s new president. Two years later the American organization Freedom House included Chechnya in the “Worst of the Worst” list of most repressive societies in the world, together with Burma, North Korea and  China’s Tibet.

But the question remains why, when the USSR was fragmenting, was Moscow so determined to retain Chechnya?

In a word –oil, for both its indigenous reserves and as the sole transit point for Azerbaijan’s rising exports, which Western companies were eagerly seeking to export to Western markets rather than via Russia.

Few today remember that Putin’s first job when appointed Prime Minister on 9 August 1999 by Russian President Boris Yeltsin was to build an oil pipeline bypassing Chechyna, as Transneft, Russia’s pipeline monopoly, controlled the Baku-Novorossiisk line, the sole export route for Azerbaijani “early” oil exports, which crossed 95 miles of Chechen territory, a region which had been at war with the Kremlin since 1994.  Following Putin’s appointment Yeltsin held a council of war over Dagestan and Putin made a rash promise that he could end a crisis caused by the incursion of 2,000 rebels from Chechnya into Dagestan in “a week and a half or two weeks.”

Work began on the bypass line on 26 October 1999. The conflict combined with other issues reduced Azeri exports via Baku-Novorossiisk in early 2000 to an average of only 10,000 barrels per day (bpd.)  In April 2000 construction finished on the $140 million, 204-mile Baku-Novorossiisk bypass via Dagestan to Tikhoretsk.  The bypass had a potential capacity of 120,000 bpd, but by then Azerbaijan already had other plans, having worked with neighboring Georgia to develop an alternative pipeline route to Georgia’s Black Sea port of Supsa, completely outside of Russian control.  When Yeltsin resigned on 31 December 1999 Putin became acting President and has continued to lead the Russian state ever since, eiher as Prime Minister or President.

For Putin, quite aside from issues of pride, An independent Chechnya could not only lead to a loss of revenue from the republic’s modest oil production (of such quality that Chechen oil was used to light lamps in the Vatican) and ruin plans to extract transit fees for Azeri “early oil,” but lead to a significant potential loss of Caspian reserves once the sea’s waters and seabed were divided, if Chechnya aligned itself with neighboring Dagestan.

U.S. penetration of Azerbaijan’s and Kazakhstan’s energy sectors continued apace during the conflict.  As reported by EC-TACIS, for the period 1994-1999 the main sources of foreign direct investment in Azerbaijan were the United States with 28 percent, followed by Britain with 15 percent.  FDI in Azerbaijan exploded from only $30 million in 1994 to $827 million in 1999, about 17 percent of Azerbaijan’s GDP, with approximately 90 percent of FDI concentrated in the country’s hydrocarbons sector, while Kazakhstan FDI accounted for $1.6 billion in the same period, but which now exceeds $160 billion of foreign FDI. Russia was clearly losing the battle to develop Caspian energy, and an independent Chechen-Dagestani state would make Moscow’s position untenable and hence had to be stopped at any cost. U.S. Vice President Dick Cheney observed the year before Putin’s appointment, “I can’t think of a time when we’ve had a region emerge as suddenly to become as strategically significant as the Caspian.”

Accordingly, the Chechen conflict dovetailed perfectly not only into Washington’s plans, to bog down the Russian military in a long, drawn-out conflict in the Caucasus, but provide Western energy companies with an alternative route as Chechnya was slowly ground down by the Russian military.

Oil that would have otherwise moved northwards to Russia, providing lucrative transit fees.

Chechnya proved ground zero for both Western political and business interests.
All of the above history, virtually unknown in the U.S., is deeply known to every Chechen. The shadow war between Moscow and Washington for the Caspian’s energy riches saw Chechnya squarely caught in the middle, leaving the Chechen homeland virtually destroyed, something to remember when reading the increasingly contradictory news reports coming out of Washington about the blood shed in Boston by the Tsarnaev brothers, as the U.S. is hardly blameless about the carnage visited on their ancestral homeland.