Bread and Circuses: The Last Days of the American Empire 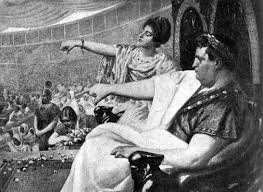 Pan et Circenses (Bread and Circuses) famously described the relationship between the Roman Emperor and his people in the decadent years of the Empire, and they seem fairly applied to America today. We have, in line with our technological advancement, upgraded (if that is the term) to food stamps (47.5 million and counting) and sports, but the broad scenario hasn’t changed.

The Romans devalued their denarius by reducing its silver content; we devalue our dollar by issuing more of them against an unchanged amount of real wealth. To wit: Gas was 20 cents a gallon in the early 1930’s; a new 1937 Chevrolet could be had for $725 and a 1940 haircut was $0.50. Imperial Rome failed to manage its finances; imperial America’s debt, deficits and inflation are just an updated rerun.

None argue Rome’s status as an empire; the universal presence of Roman legions and Roman-appointed governors left no debate. While many deny American imperial status, those have some questions to answer. U.S. forces are based all over the world with somewhere between 700 and 1,000 overseas locations. Ron Paul, during the 2012 Presidential debates, put it at 900 bases in 130 countries. Too, the U.S. presence is not identified solely by armed forces; it sends dollars widely as well. The 2012 Census report of Foreign Economic and Military Aid totaled some $45 B, handed to 70 such major (and numerous minor) recipients as Pakistan, Egypt, Russia, (Russia?) Zimbabwe and the Gaza Strip. If the U.S. is not an empire, it certainly seems to act like one. And as Rome’s empire finally exceeded its finances, so now with America. One cannot finance an empire with deficits.

America’s ‘defense’ budget has been about 20% of its spending, thereby providing a chunk of that annual deficit. The total exceeds the totals of the next eleven of the largest military spenders, added together. China, the second largest, spends about one sixth of U.S. spending. If this is ‘defense’ rather than imperial reach, whomever the U.S. fears must be located on some other planet; they aren’t visible on earth.

Rome’s initially conservative society gave up its gods and fell into decadence, a model for the devolution of America’s Christian, Constitutional founding to its present anti-Christian, functionally post-Constitutional government. From its 2008 intervention on Wall Street through its 2009 disposition of the U.S. automakers through today’s Administration assassinations by drone and its Obamacare abortion and birth control mandates on religious health care institutions, American government has moved into increasingly post-Christian and post-Constitutional waters. Currently, various pending court cases questioning the health care mandates and drone assassinations are raising constitutional issues; so has passage of the National Defense Authorization Act 2012 provision empowering military arrest and indefinite imprisonment of citizens without due process. Whether or not one perceives today’s America as decadent, it is clearly not what it was at its Founding.

Though the social changes seem comparable to the ancient model, it is the financial mismanagement and economically destructive government policies that seem to assure the end of the American empire. The Federal deficit hovers over $1 T of a total $3.5 T of spending. The deficit is funded by debt, currently exceeding $147,000 per taxpayer, in order to continue the social and military spending at their respective 61% and 19% of outlays. These financial burdens, with the interest to be added, will impede growth and investment for decades as the money to repay them is diverted from the private sector. And that sector, claims of resurgence notwithstanding, remains flabby.

But these debts alone do not define the risk. The government has guaranteed much of the lending by the home mortgage industry (Fannie Mae, Freddie Mac and others) and via FDIC, nearly everybody’s bank balances. Those obligations, as we saw in 2008-10, are real and they add $15.3 T to the government’s risk. Both the U.S. and Europe are running on empty without a known gas station anywhere; what’s bought with debt, is always followed by a bill.

Social spending is out of control, with the baby boomers now challenging Social Security and Medicare.  Obamacare, per the latest revised government report, is increasing the deficit. Public salaries and welfare are overwhelming some cities, counties and states; many public pensions owe more than they can pay, thanks to the long held Fed lid on interest rates that has held safe investment earnings low. American government at all levels has reached the limit or outrun the resources available. Many places are increasing taxes, thereby further defunding their private sectors. There is no imaginable source that will continue to fund America’s current social welfare and foreign military extravagance.

So when a stock market collapse or big banks’ failure pushes the button, widespread financial failures will again challenge government spending. Pumping funny money into the economy as monetary CPR has already been pushed to an extreme; our governors will either follow Europe into ‘austerity’ or devalue the dollar with inflation. Spending will have to decline.

International adventures don’t directly involve the mass of voters, at least up front. The military-industrial lobbyists and their neo-con politicians will howl, but their screams will seem minor when social spending adjustments begin just as unemployment worsens. Like Europeans, Americans will learn again that politicians must fulfill their promises with real money. And as Margaret Thatcher famously informed the British: “Eventually, you run out of other peoples’ money.”

America is running out of money borrowed from its pressured citizens’ kids and grandkids via Federal Reserve ‘Quantitative Easing’ games. Nobody can live on promises forever. Stock markets and banks will shortly exhale the funny-money hot air sustaining them, interest rates will start their climb back to normal and the government will defund first, its war machine and foreign bribe programs, then its welfare beneficiaries. As with the Old Romans, American military will decline, along with cradle-to-grave social welfare. And American citizens are likely to see change…more change than they expected that their President had in mind. Food stamps will be cut and huge salaries will disappear from pro sports. As that financial wave crests and begins to recede, America won’t be an empire any more. It will have everything it can handle just tending to its own business.

One thought on “Bread and Circuses: The Last Days of the American Empire”