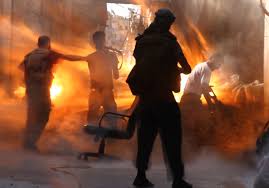 Has anyone noticed that as the socialist insurgent government in the US is desperately working to salvage the Syrian insurgency, the prospect for World War III commencing is intentionally being buried within the confines of the mainstream propaganda?  Realistically what are NSA leaks showing spying on Americans, IRS attacks on patriots, and an airplane explosion that happened 17 years ago in comparison to pushing closer to the apex of thermal nuclear war?

Syria’s government forces have defeated the US/Israeli backed Al Qaeda incursion through conventional warfare and the Zionist aspirations for further Middle East invasion are coming unglued.  The enemies of humanity are growing more desperate every day and as Syria is removed from the television screen, I have to believe that plans to revive the dying program are being formulated and must include a series of false flags, both in the Middle East and in the United States.

The assertion that sarin gas was used by the Assad forces has been summarily dismissed and removed as a UN trigger mechanism by the Russians as we Americans are being distracted by the Edward Snowden drama and the George Zimmerman trial.

I noticed this weekend that the mainstream propaganda has fallen into “look at the puppy dog” mode as the essence of all information is being brought down to a third grade level.  I have noticed in the past that this is an indicator that a new propaganda production is in the works and will be introduced as a surprise that no one saw coming.  This is how current events are pushed into the past to be overshadowed and made null and void within a mere week.

Bottom line, the enemies of peace must act soon or the Syrian Civil War will be concluded and become a fait accompli.  The Zionists will not allow this to happen.  The Syrian issue is number one in priority for the Zionist elite and it does not matter what else in the world is going on as everything else is not but a diversion.  The Israelis have made it clear that they are hell bent on attacking Syria, Lebanon, and Iran, or better yet, hell bent on America capturing those countries for them.

Stop watching to see where Edward Snowden might be headed and start looking at the troop and equipment movements that are taking place in preparation for the next world war, which when made nuclear, will render all other issues as little in consequence.

May the Lord help us to keep our eyes affixed on both the right and left hand.