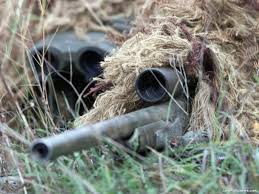 The sniper is the most efficient of soldiers. The current military emphasis on firepower, combined with the use of deterrent suppressive fire, has seen the number of small arms rounds fired per casualty inflicted rise from several hundred at the start of this century to tens if not hundreds of thousands in modern high-intensity conflicts. Through all this, snipers have maintained a rate of approximately 1.3 rounds per casualty.

The lethal effectiveness of snipers also makes them the most unpopular of soldiers with their adversaries. Detection of a sniper usually results in a mortar attack if not a comprehensive artillery shoot, so snipers have to be experts in concealment as well as crack shots. They also have to be prepared to change position rapidly as soon as they feel that their position might have been spotted.

Most sniping rifles are chambered for the standard military cartridge, currently usually the 7.62 x 51 NATO or 7.62 x 54 R Russian depending on historical allegiance. These are not ideal because a heavier bullet at a higher muzzle velocity would ensure better long-range accuracy, so specialist rifles are available with more powerful cartridges such as the .300″ Winchester Magnum and the .338″ Lapua. Some rifles go even further, being chambered for rounds of calibres up to the .50″ Browning heavy machine gun cartridge. These are described in THIS article.

All of these rifles have a major disadvantage from the sniper’s point of view in that they are very obvious in use. The muzzle report can be heard at great distances and although this problem is increasingly being tackled by fitting a sound suppressor, the sharp crack of a supersonic bullet still gives clear warning to the enemy that they are under attack. There has therefore been a continuing interest in a genuinely silent sniping rifle for covert operations, and there is a wider choice now than has ever existed before.

The problem is that a silent rifle has to generate a muzzle velocity below the speed of sound, which is at around 320 m/sec (1,050 fps) depending on altitude and air temperature. This is in the realm of pistol rather than rifle cartridges so it is no surprise that one of the first and best known of such weapons used such a cartridge. This was the De Lisle Carbine, developed for British special forces in World War 2, which consisted of a Lee Enfield bolt action rifle chambered for the standard .45″ Auto from the Colt 1911 pistol (11.5 x 23 in metric) and fitted with an 210mm barrel and a massive suppressor. Initial examples used the standard Lee-Enfield stock but a paratroop version with a folding stock was also produced. The problem with the De Lisle was that although it was reportedly accurate to over 300m, the velocity of around 260 m/sec combined with a relatively light (230 grain / 14.9 g) round-nosed bullet which lost velocity relatively quickly resulted in a rainbow-shaped trajectory at long range, making accurate range estimation crucial.

The next development along these lines went some way to solving the problem. This was an American bolt action rifle, fitted with a target barrel, a silencer and a telescopic sight, which saw experimental use in Vietnam. It was based around a new cartridge, the .458 x 1.5″ Barnes (actually 11.6 x 33 B), which was essentially a shortened .458″ Winchester big game round, firing the usual 500 grain (32.4 g) bullet at just below the speed of sound. It was apparently not entirely successful, largely because the bulk and weight caused by the long, heavy target barrel didn’t endear it to the troops.

Even this was not the ultimate answer as the bullet was still round-nosed and therefore quickly lost velocity and effectiveness at long range. This prompted the development of cartridges using very heavy, pointed, boat-tailed bullets of excellent shape to minimise the velocity loss. Initially these were modified loadings of existing rifle rounds and such loadings are still available in all standard military rifle calibres, as they have some utility where the users want to carry only one weapon for both covert and open use. However, these are not very efficient: the small calibres limit the bullet weight which can be used before the rifling can no longer stabilise the bullet’s flight, while the cartridges cases are far too big for the small quantity of propellant needed to reach subsonic velocity.

As a result, a new breed of specialised subsonic rounds has arisen in the past few decades. These can only be used in purpose-designed rifles, usually fitted with short barrels and a large suppressor. They are designed for maximum efficiency in the role, so have relative large calibres and use small cartridge cases to fire the heaviest practicable bullets. The smaller versions are intended for use in suitably modified military rifles which may also feature selective fire (the capability for automatic firing), the larger ones for use in bolt-action rifles. Some of the cartridges are also available with supersonic loadings (for use with or without the suppressor) so that users can be more effectively equipped for when covert use is not needed.

One of the first, and certainly the most prolific, manufacturers of specialist subsonic rounds is SSK Industries of the USA, who produce the Whisper range of ammunition. These include 6, 6.5, 7, 7.62 (.300 Whisper), and 8.6 mm (.338 Whisper II) rounds, all using cartridge cases with the same diameter as the 5.56 x 45 but just 35-36 mm long so they can be loaded with longer bullets while keeping within the same maximum round length. This enables them to be chambered in rebarrelled versions of the standard M16 assault rifle, and they can even use the 5.56 mm magazines. SSK also makes subsonic loadings of the 7.63 x 25 (.30 Mauser) and 7.65 x 21 (.30 Luger) cartridges, marketed as the Mini-Whisper and Micro-Whisper respectively, with pointed heavy bullets making them too long to be used in the pistols.  Other cartridges are based on the 7.62 x 51 NATO case, but shortened and again in various calibres: .302, .338 (Whisper I) .375  and .416 Whispers, the last of these (which has so far evaded my collection) being virtually straight-cased. These can be used in modified 7.62 mm rifles such as the AR-10 family, or when fitted with shorter bullets to keep the same overall length as the 5.56 x 45 can be used in an M16 with more extensive modifications and different magazines. Finally, even larger rounds have been developed: the .458, .500 and .510 Whispers, based on the .458 Winchester Magnum, .460 Weatherby Magnum and .338 Lapua Magnum cases respectively.

The smaller examples are unlikely to have much military utility so this article will focus on those of 7.62+ mm (.30+ inch) calibre intended for use in military rifles. The smallest of these was the first to come to notice and is probably the most popular by a long way; the .30″ Whisper (now known as the .300 Whisper), which uses a .221″ Remington Fireball cartridge necked out to 7.62 mm calibre to take a 210 grain (13.6 g) boat-tailed spitzer match bullet. This has proved so successful that it has prompted very similar developments by other manufacturers. The first was for the Heckler & Koch SL9 SD suppressed rifle; the 7.62 x 37 HK, produced by BAE Systems Radway Green ammunition plant in around 2000. It is unclear whether or not this rifle achieved any sales, and the ammunition is no longer in production. In the past couple of years three other very similar rounds have emerged: the7.62 x 37 Musang from the Philippines (which has also yet to find a place in my collection), the AAC 300 Blackout and the 7.62 x 40 Wilson Tactical, both from the USA. The Blackout is a straight copy of the .300 Whisper, the main difference being that it is SAAMI registered and the focus is more on the supersonic loadings, which are a close match for the old 7.62 x 39 Kalashnikov rounds. The Wilson round is optimised for supersonic loadings and is included here only for comparison purposes.

The main US rival to SSK is Teppo Jutsu, which offers three options. The .30 HRT is essentially a 6.8 x 43 Remington case modified to 7.62 x 41. It therefore has a case diameter intermediate between the 5.56 mm and 7.62 mm, but can be used in suitably modified AR-15 (M16) rifles. This is not a specialised subsonic round because the emphasis is very much on the supersonic loadings, but it is also offered loaded with a 15.6 g (240 grain) bullet in a subsonic loading. The .338 Spectre uses the same case shortened to 32 mm, the .458 SOCOM is a multi-purpose (supersonic and subsonic) cartridge small enough to fit into modified M16 rifles while and the .500 Phantom can be used in modified 7.62 mm rifles when loaded with shorter bullets than the A-MAX shown below.  It is even available with a saboted .30 cal bullet at 3,200 fps (975 m/s)! More details and photos of the Teppo Jutsu range are HERE.

One American oddity is the .460 Alliance, very much in the same mould as the big-bore cartridges developed for the AR-15 as described HERE. However, it is intended for modified Kalashnikov AK/AKM pattern rifles. It is currently only available in supersonic loadings, but has clear potential for a heavy-bullet subsonic development.

The Americans are not the only ones interested in subsonic rounds as the French developed the ANTHIS rifle, based on an ERMA weapon using a STOPSON sound suppressor. The cartridge, based on the .460″ Weatherby case, appears to be dimensionally identical to the .50″ Whisper and was in fact made in America by A-Square. Any .50″ Browning machine gun bullet could be used.

The most prolific developers of subsonic ammunition after the Americans have been the Russians. The best-known example is the 9 x 39, developed by necking-up the 7.62 x 39 case after a heavy-bullet loading of that case proved unsatisfactory. It is in use in a specialised suppressed rifle (the VSS) but the effectiveness of the heavy bullet at short range has also led to its adoption in some unsuppressed compact assault rifles for urban fighting, such as the OTs-14, 9A-91 and SR3M Vikhr. Russia has also introduced the 12.7mm Vychlop, using a 12.7 x 55 straight rimless case which is similar to the .510 Whisper. This is available in several subsonic loadings for use in the VSSK suppressed rifle. More recently, supersonic loadings have been developed for use in the ASh-12 selective-fire assault rifle.

NB: The Sectional Density (SD: a function of the bullet weight and calibre) is multiplied by a form factor derived from the shape of the bullet in order to obtain the Ballistic Coefficient (BC). The higher the ballistic coefficient, the better the velocity retention and therefore the greater the effectiveness at long range. The SD gives an indication of the potential for barrier penetration and long-range performance, when comparing bullets of similar shape.

Cartridges of the World (Barnes)

One thought on “Cartridges for Silenced Sniper Rifle”