A proposed $1.5 billion sale of two ship sets worth of Aegis combat systems, anti-submarine warfare systems and a cooperative engagement capability (CEC) equipment will give Japan’s planned new class of destroyers the capacity to connect and receive information from American battle networks, according to a list of items in a foreign military sales (FMS) notification issued by the Defense Security Cooperation Agency on Friday.

The DSCA notice laid out the planned offensive punch of the Japanese Maritime Self Defense Force’s (JMSDF) yet-unnamed class of guided missile destroyer (DDG) that is planned to join the Japanese fleet in the 2020s — currently referred to as the 27DD, according to a July story in Navy Recognition. 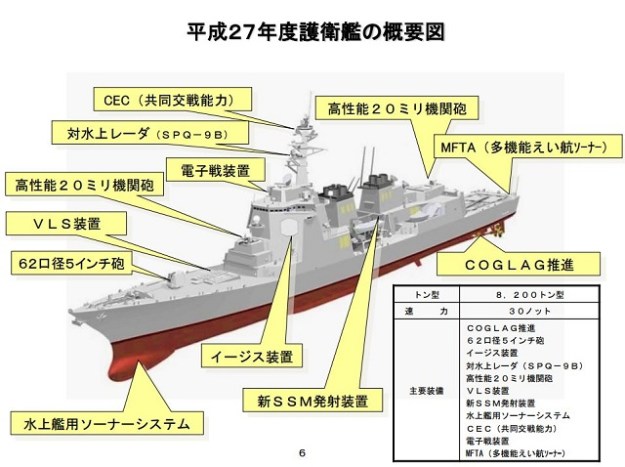 The planned weapon systems sale for the two ships — the hulls of which will be built in Japan — further cements Japan’s trajectory in purchasing next generation weapons systems set to be compatible with the U.S. Navy’s emerging Naval Integrated Fire Control Counter Air (NIFC-CA)

“Japan continues to modernize its fleet to support Integrated Air and Missile Defense (IAMD) roles and special mission requirements. The addition of two new AEGIS DDGs will fulfill Japan’s mission goal of acquiring eight ballistic missile defense capable ships and will further enhance interoperability with the U.S. Navy, read the Friday statement.
“The proposed sale to Japan will represent an important commitment by the U.S. Government in furtherance of foreign policy and national security goals for both the United States and Japan.”

Centered around the established Lockheed Martin SPY-1D radar, the planned Mk 7 buys from Japan would give the 27DD class the same capabilities of the U.S. Navy’s Baseline 9 Arleigh Burke DDGs — capable of tackling ballistic missile defense (BMD) and simultaneously intercepting cruise missiles and aircraft — as well as transmitting and receiving target quality tracks to friendly ships and aircraft through CEC data links.

A planned upgrade to Japan’s existing Atago-class destroyers — announced in late May — will also give the two ships a similar technical backbone to tie into a joint U.S. and Japanese networked battle force.

In addition to the Mk 7 Aegis Combat systems, and CEC the 27DDs will be outfitted with the AN/SQQ-89A anti-submarine warfare suite.

The following is the list of materials from the Aug 7, 2015 DSCA announcement.