I don’t always enjoy writing about these topics, the thousands of deaths (and growing) at the hands of police in the last few years, the abuse of authority, the blue privilege, the police state in general; so it was a pleasure to hear that my favorite superhero, The Dark Knight Batman takes on police state topics in the latest issue of the Batman Comic by writer Scott Snyder.

I’m not so much now, but I was in the past, a huge comic book fan. Now I know there are some people who say things like that because it inserts them in to a particular pop-culture crowd, one that is very pop-ular right now, but when I say it I mean it. I have owned in my life more than 12,000 comic books.

So now you see why, when an article by MSNBC was pointed out to me concerning the latest issue of Batman, I had to jump at the chance to review and do a write up on it. Of course it almost goes without saying that MSNBC completely botched the facts of the comic and as usual it was done for the click receiving headline “New Batman comic book portrays black teen slain by white cop“. Or, to be fair, maybe the author Nicole Brown has never picked up a comic book in her life, least of all this one. She incorrectly states…

The story begins with the Dark Knight investigating the murder of a 15-year-old black boy by a white police officer. The crimes takes place when the boy exits his father’s bodega in Gotham City after fighting with a local gang. He then encounters the officer, and before he can oblige his demand to lie down, the officer fatally shoots him in the stomach.

This is wrong. It’s so wrong that it proves that Miss Brown did not read the comic because by page three of the story Batman himself states “…I scanned him, he died from a fall. Dropped here from about a thousand feet up.” 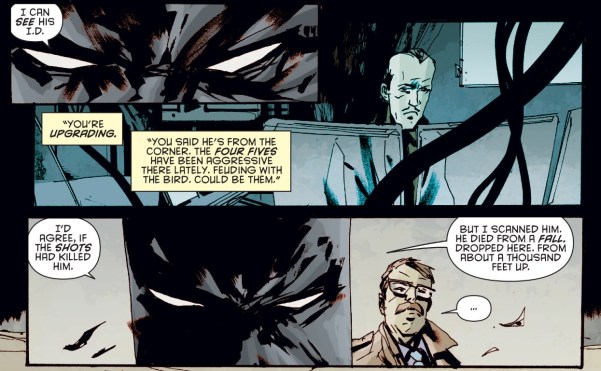 Not to excuse the action itself but there is more to the story and simply put, the shots didn’t kill Peter Duggio. Duggio was a 15 year old black kid from The Corner in a run-down, gang infested, section of Gotham called The Narrows. I know this because, unlike Miss Brown, I went out and immediately picked up issue number 44 of Batman and read it before I placed my name on a story about it.

I know what you’re thinking, bummer right? We wont get to see The Dark Knight pummel a bad cop like his counter-part, the “boy scout” Superman did just two months ago in issue #42 of Action Comics. Except, if you read Action Comics #43 then you know that Superman, now mostly powerless, didn’t actually punch out a cop at the end of issue 42. Superman stood there and was beaten up on by Metropolis S.W.A.T (members of which he had saved on numerous occasions), he then leveled one punch at the commanding officer who it turns out was actually one of the shadow creatures that has been terrorizing the city. A cop-out, pun intended. I never liked Superman. His red, white, and blue, law and order persona was a turn off from day one for me. Face it, Superman’s appeal is to statists and cop suckers; meddlers and schemers as the Joker might put it. That’s why they’ve tried so many times over the years to harden his image, with little success. But back to the matter at hand. 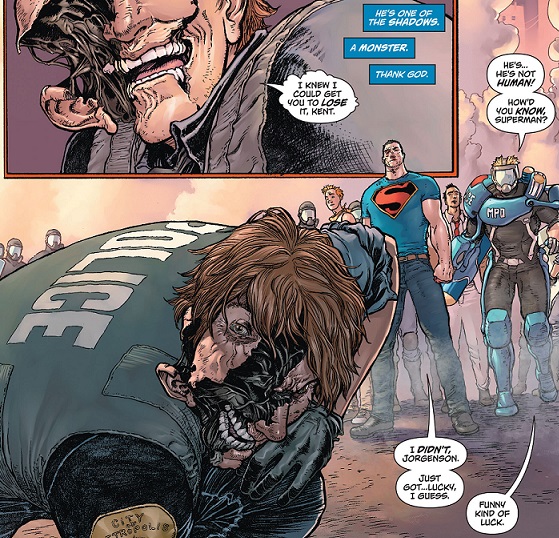 The MSNBC treatment was based on this piece from The Guardian which unsurprisingly also missed the bigger point and pushes a race baiting agenda on us. This is their opening.

People die every day in Gotham City, the fictional hive of corruption where Batman patrols the rooftops. But not until Wednesday did the Dark Knight find himself investigating a black teenager in a hoodie shot dead by a frightened white police officer, let alone wondering about his own indirect role in the boy’s death

It’s already clear from what I’ve pointed out here that the white cop Ned Howler, an entitled drunk who is quick to pull his piece and wave it around under the most mundane of circumstances while spouting the typical NAZI excuse “I was just doing my job” when confronted with his actions, did not kill the unarmed black teenager, but here goes the press again saying he did. 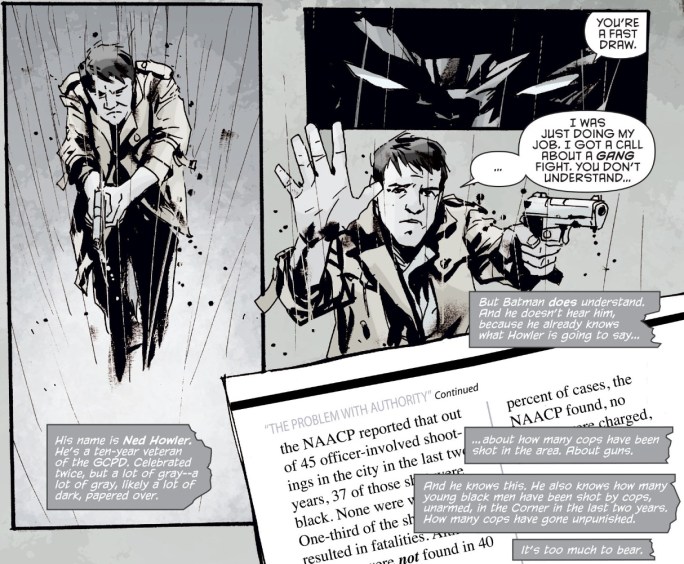 Officer Howler responds to the scene of a gang fight that ends in the accidental destruction of Duggio’s family bodega now taken over by the street gang known as the Four Fives. The bodega was given to them by Oswald Cobblepot, aka Penguin, as a peace offering in their ongoing battle for control of black market trade in The Narrows. Batman tracks down Penguin, cages him, and gets the story. It’s during the interrogation of Penguin we start to get to some of the actual real important points this issue of the comic has to make. Duggio had gone to Penguin hoping that he would help protect his fathers hard earned store front from gentrification, and not too ironically the Four Fives who had already claimed Duggio’s older brother. As Penguin chides the Bat for not going after Gotham’s real criminals, he tells the tale of how he met Duggio. Batman only half listens recalling recent news in the Gotham Gazette finding…

Batman moves on to investigate the burned out bodega and encounters some of the Four Fives crew including their leader Tano Canacoo. Batman assumes Canacoo and the Four Fives must have something to do with the destruction of the store and the death of Duggio, perhaps a message to Penguin? But wrong again Batman finds out, after sparing with some Four Fives, that in fact it was Duggio himself who was responsible for the burned out bodega. In a rage and, as Batman later learns, all drugged up, Duggio attacks the gang and during the fight damages a gas line which leads to the fire. Batman then receives a call from GCPD Detective Jim Gordon with bad news: Duggio went to the cops, they blew him off. Gordon also has a name for him, the name of a ten-year veteran of the Gotham City Police Department “Celebrated twice, but a lot of gray–a lot of gray, likely a lot of dark, papered over”. Again, very reminiscent of reality. 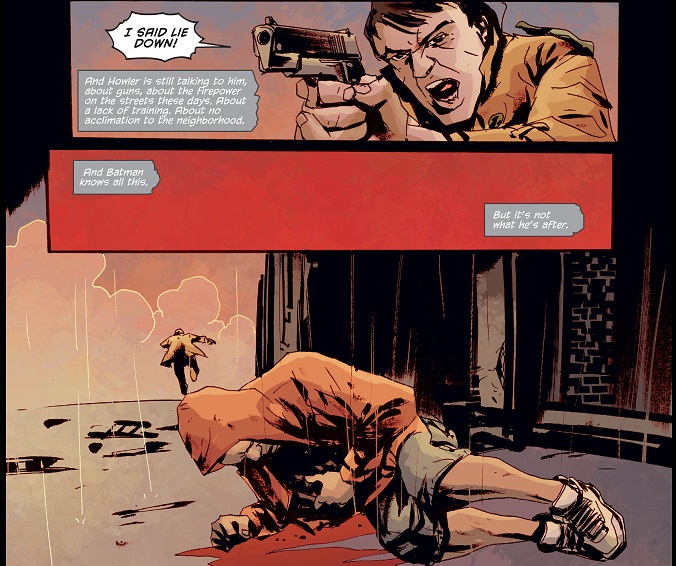 Still searching to find the cause of Duggio’s ultimate fate, Batman visits the hospital bed of Peter’s father where he encounters Peter’s cousin. It’s this encounter that makes Batman add himself to the list of people not directly responsible for Duggio’s death when he learns that the cousin told Duggio to go to the money to save the store. Not the bank, “The bank doesn’t listen to folks with no money. I told him to go to the man behind the bank, I told him to go to Bruce Wayne”. 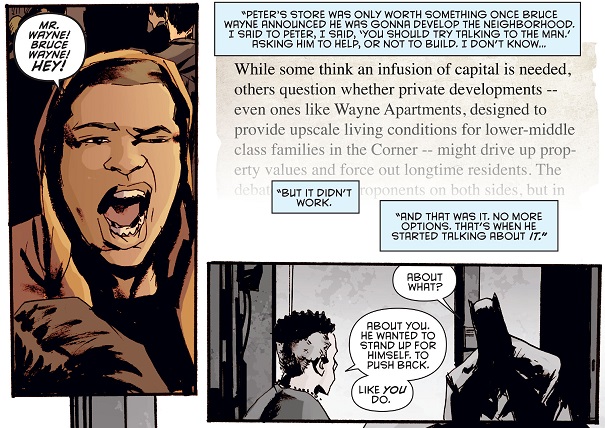 The cousin tells Batman that when Peter found no solution pursuing Wayne, as a last resort he went to Blossom Row. “The alley with the man waiting at the end. The man who has something special just for you”. Batman knows that alley. Batman knows (will come to know) that man. His name is Dr. Kirk Langstrom a scientist in the field of chiropterology (the study of winged mammals, bats). Langstrom, in a search for a cure for his deafness, created a serum from bat blood that will (eventually) turn him in to the Man-Bat. Langstrom has bonded his concoction with steroidal venom (what ultimately becomes the substance Bane uses for his strength) and is selling the designer drug on the street. Not to delve too deep in to the entire Bat-mythos, but a few years back DC did a reboot of all its main titles, that’s why a comic book from 1940 is only at issue number 44 some 75 years later. And ultimately the stories of these characters and their first meetings are being retold to new audiences, some of it with differences from the original accounts.

So it all comes together now. An otherwise innocent young man looking for protection from one gang turns to another gang who does him dirty. In an attempt to retake what was his he looks to the police and finds no help. He turns to the power elite and finds no help. And in a last ditch effort he tries, as Batman himself does, to take matters in to his own hands. Dr. Langstrom’s drug gives Duggio strength but it comes at a price. Duggio destroys what he set out to save and in the process is wounded by a trigger happy cop. The wound triggers the side effects of Langstrom’s drug which causes Duggio to physically transform. He grows wings like a bat and flies away seeking help. As the drug wears off he comes crashing to earth in the swamp at the edge of Gotham where the impact kills him.

The real story here is about more than race. Duggio could be any young kid in our collapsing economy reaching out for help. The fact that he is black is such a minor part of the story. Poor people exist in all shapes, sizes, and colors. Poor people are who the police abuse, murder and violate on a daily basis in this nation. Gentrification is not a race issue, by definition it is an economic issue. This is A Simple Case (the title of the issue) of our collective nation letting down our youth. We have allowed our politicians and so called elite to destroy this nation with socialism, public loss for private gain. We have passed the buck from one generation to the next making it harder for each succeeding generation to achieve the dreams of our nations founders. We have ushered in a police state apparatus which preys on the poor and the ignorant to bring home a paycheck. Batman spends the issue looking for someone to blame and in the end he finds we are to blame. 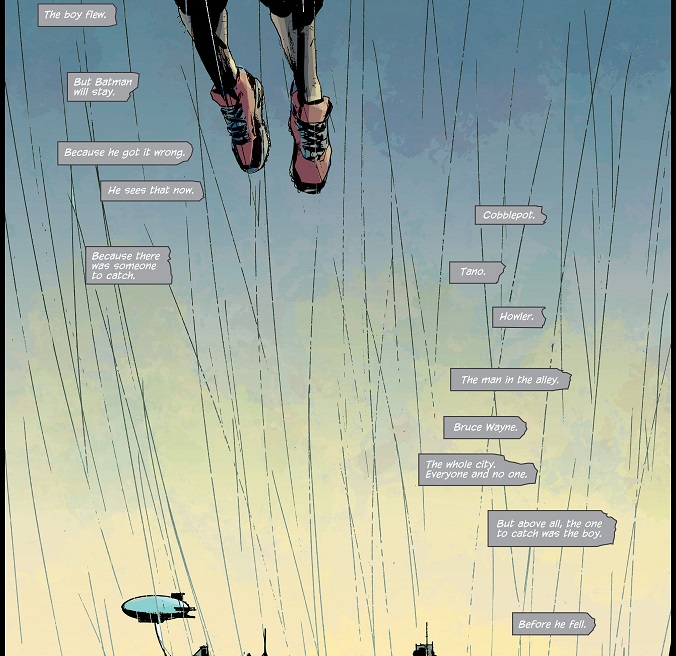 How did this happen? Who’s to blame? Well, certainly, there are those who are more responsible than others, and they will be held accountable. But again, truth be told, if you’re looking for the guilty, you need only look into a mirror. I know why you did it. I know you were afraid. Who wouldn’t be? War, terror, disease. They were a myriad of problems which conspired to corrupt your reason and rob you of your common sense. Fear got the best of you, and in your panic you turned to the now high chancellor, Adam Sutler. He promised you order, he promised you peace, and all he demanded in return was your silent, obedient consent.