Debt Bomb on the Brink of Explosion 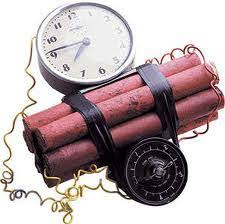 Cyprus has set an unpopular precedent; it has given us a grim look into the future. As our global debt bomb grows beyond any hope of sustainability, confiscation could be the next step.

Sadly, this threat is real, as demonstrated by the bank bailout proposed in Cyprus last week. The financial realm was shocked when the nation’s financial leaders agreed to steal cash from bank depositors in order to fund an emergency bailout.

Cyprus can use whatever vernacular they want; that’s still stealing. Calling that measure a “tax” – one that punishes savers, no less – isn’t fooling anyone. It’s theft, no matter how you look at it. The fact that this option was even on the table is mind-blowing.

Fortunately for banks depositors, “lawmakers rejected a 10 billion euro bailout package on Tuesday, sending the president back to the drawing board to devise a new plan that might still enable the country to receive a financial lifeline while avoiding a default that could reignite the euro crisis,” according to The New York Times.

And just because this controversy occurred overseas doesn’t mean we’re any safer in the U.S. The debt crisis is a global dilemma, and everybody’s suffering, like it or not.

I’ve heard repeatedly you can’t live your life in fear, but you will surely perish if you ignore danger. Fears pertaining to global debt woes have now exploded into full-blown danger. The danger of losing your savings is no joke. We are all in danger of bank account confiscation. It’s no longer an irrational fear…

Americans think Europe’s leaders have lost their minds, as the world loses all faith and trust in the banking institution. This will surely have a butterfly effect on banks around the world. How long until our banks start implementing their own new “levies” on us?

Nothing stopped them from using taxpayer dollars to pay for the last bailout… not to mention the$83 billion they already get from us each year.

Global debt is now greater than that of all the bank accounts in the world. This dangerous debt bomb is on the brink of explosion…

We’re keeping a keen eye on the ricochet effect so we can keep you in the loop on how to protect your money, your savings, and your retirement accounts amidst all this chaos.

2 thoughts on “Debt Bomb on the Brink of Explosion”