Flashback: Warning: “Watch The Metals, When They Dip. It Will Be A Good Indication That Things Are About To Happen.” 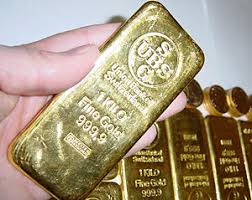 As of this print the price of gold is reaching fresh two year lows, down nearly 25% from its all time high just six months ago. Though uninformed onlookers and financial pundits may see this as the popping of the proverbial gold bubble, the velocity and scale of the take-down in precious metals suggests that there is a massive assault in the works. According to former Assistant Treasury Secretary Paul Craig Roberts, last Friday’s price drop was the result of some 500 tons of gold being dumped onto paper markets, an amount equal to about $25 Billion dollars worth of the metal. Likewise, silver saw a similar dump and price drop. Moreover, the very same thing is taking place this morning, suggesting that some very large and influential market makers are involved.

Who has that kind of money and can afford to lose it in naked short positions? According to Paul Craig Roberts, “only a central bank that can print it.”

Thus, one must assume that this is not a natural effect of the free market, but rather, a coordinated attack on the global precious metals exchange orchestrated by our very own Federal Reserve, an organization run by a board of directors that includes representatives from some of the world’s largest banking institutions.

What’s most alarming about the collapse of gold and silver is that it was predicted in December of 2012 by a Department of Homeland Security Insider. In an interview with Doug Hagmann at the Northeast Intelligence Network, the insider warned that life for the average America would change drastically, and soon, and that this change would be preceded by various events, one of which is a major dip in precious metals:

They already are in motion. If you’re looking for a date I can’t tell you. Remember, the objectives are the same, but plans, well, they adapt. They exploit. Watch how this fiscal cliff thing plays out. This is the run-up to the next beg economic event.

I can’t give you a date. I can tell you to watch things this spring. Start with the inauguration and go from there. Watch the metals, when they dip. It will be a good indication that things are about to happen. I got that little tidbit from my friend at [REDACTED]

If we were to assume that this 25% dip amounting to some $50 billion just over the last two days could be the the precious metals “dip” referred to by the DHS Insider, then we must likewise assume that some very serious events are on the horizon.

That remains to be seen, but if the US government’s war-gaming of economic collapse and civil unrest is any guide, we may be looking at the worst case scenario many have feared – an engineered collapse of our financial and economic systems leading to the centralization of control through implementation of martial law across America.

Perhaps. Unless of course you’re part of the Congressional membership that was explicitly warned of this very possibility at the height of the 2008 crisis:

Many of us were told in private conversations that if we voted against this bill on Monday, that the sky would fall, the market would drop two or three thousands points the first day, another couple thousand the second day, and a few members were even told that there would be martial law in America if we voted no.

Do you really think they saved the system back in 2008?

According to SGT Report, those involved in the take-down of gold and silver may not been done yet, as the unrelenting push against precious metals proves once again that the arrogance of criminal cartels behind global financial market manipulation continues.

We once opined that you should expect exactly such an event – a mega drop in precious metals – to take place and that you’ll hate your gold so much you’ll want to spit on it.

But consider that in the 1970′s, as gold assailed to its eventual all-time highs, it washalved in price at least once over the ten year period that it rose from double digits to over $800 per ounce.

During times of uncertainty, irrational events will occur. This is inevitable.

Consider what is money when the system as we know it collapses, and continue to acquire those hard assets that will retain value and barterability.

The worst is yet to come.

2 thoughts on “Flashback: Warning: “Watch The Metals, When They Dip. It Will Be A Good Indication That Things Are About To Happen.””