For the soldier with the pen 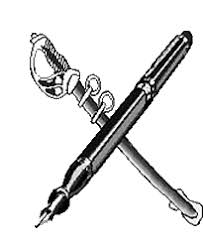 Yesterday I read an article written by a soldier, or militia member, and he was complaining about writers who stir up other people to fight, and his implications accused them of cowardice by expressing doubt as to whether they would fight themselves, or just incite others to do it for them.

I have no idea if his article was pertaining to me specifically, and it really doesn’t matter, because it did pertain to what I, and hundreds of others do, so I am justifiably offended by this.

I’d like to ask the brave soldier why I didn’t hear him make this statement ten years ago, when there was no one on his side? And if his new-found bravery was inspired by the popularity of his cause, where does the fool think that popularity came from?

Just in case you’re stumped, I’ll explain it to you. Ten years ago much of the population was still cheering on the President for sending troops to kill the terrorists who attacked us on 9-11, and if not for writers like myself, that you now complain about, the same segment of the population, and yourself included, would probably be falling for the same lies.

Before the first American revolution we were called “pamphleteers”, and now I guess we’re called “bloggers”, but regardless of what name you choose, if you had a brain in your head you’d know that you’re dead without us.

If you look at the history of revolutions, the fist thing you’ll learn is that they have NEVER been successful without popular support. Yes, the American revolution was won with less then 2% of the people doing any fighting, but what’s missing from that statistic is the 98% of the population that supported the soldiers.

I’m sure you’re brave, and tough, and a very skilled marksman, but that’s not going to do you any good if your neighbors tell the local police that you’re a “domestic terrorist” and you die in prison before the fight begins.

Having the support of the general population will answer all of these questions in your favor, but keep alienating your support like you’ve alienated me, and you’re not going to live very long, and we’re not going to win this war. The popular support you need to survive and win is provided by writers, and no amount of military skill or experience is going to help you if the general population sees you as the enemy.

Right now the minds of the masses are still controlled by the Zionists. The vast majority of the American people still believe the lies reported on the TV, and that’s why our government generally ignores us, and instead concentrates on perfecting their propaganda. We’re not even a threat to them until most Americans support us, and we’ve yet to reach that point. Only writers can bring us there, because writers are the only opposition their propaganda machine has.

And yes, despite the fact that I’m not a soldier, I’m not a coward either, and I will be in the fight, because I don’t see that I have much choice. Until then, I’ll be waking people up, because it increases our allies and diminishes our enemies.

I may not kill as many enemy troops as you, and I probably won’t survive as long, but I’m the reason you have other people fighting on your side. Do you think you’re tough enough to take on the Chinese army by yourself, or would you prefer to have a few writers recruiting you some help? And if writers don’t do it, who will? Anybody can write an article, just as anybody can fire a rifle, in both cases, some bullets will hit the target, and some articles will miss it by a mile.
— Jolly Roger

“Beneath the rule of men entirely great, the pen is mightier than the sword.” – Baron Lytton

5 thoughts on “For the soldier with the pen”