Fukushima: Two Years of Cover Up 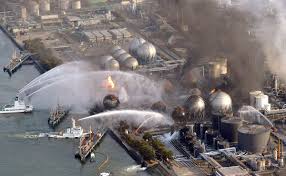 Today is the second anniversary of the Fukushima disaster and the true scale of its effect upon the United States and indeed the world can only be gauged by the extent of the cover up.  Looking at the situation logically and considering the fact that agencies like the EPA would like to have a thermometer up the backside of every person around the world under the guise of monitoring climate change, one would think that we would have been seeing daily reports as to the spread of the contamination from Fukushima through the air, ocean currents, and residual contact with items coming out of Japan.

We have heard of no punishment for those responsible for the failures at the plant following the earthquake and tsunami, which goes to show us once again that the top criminals around the planet have gained such power that they have become literally untouchable.

The EPA in the United States, which is so worried about our well being that we have been seeing SWAT team raids on those buying, selling, and consuming raw milk, has been silent as to the degree of contamination from Fukushima, which has penetrated into our food and water supplies, again, not just here, but around the world.

The international nuclear energy corporations have been successful in not only getting away with Fukushima, but also in quieting all dissent across the US, as aging reactors continue to leak death upon our land and into our waters.

According to the World Nuclear Association, “In the USA there are plans for 13 new reactors, and two combined construction and operating licenses for these were issued early in 2012 while five more are under review. All are for late third-generation plants, and a further proposal is for two ABWR units.  It is expected that some of the new reactors will be on line by 2020.”

I looked for the amount that we taxpayers are subsidizing the nuclear industry in the United States and the closest thing I could come up with for a number was from 2010, which amounted to $2.5 billion.  It would appear that these numbers are not meant to be readily accessible by the taxpayer.

I will close this article with the ultimate in despicable irony.  If our population has been critically radiated by Fukushima, does anyone believe that this insurgent government, that makes no secret of the fact that they want us all dead, would let us know?  The one absolute lesson that cannot be denied as a result of Fukushima is that when put in the balance with elitist profits, the lives of common people are outweighed to the point of insignificance and when the cancers become widespread, any compensation for the victims will be denied, using the excuse that no credible data exists to support the claims.  And again, we have those who we have paid handsomely to monitor such catastrophes to thank for this situation.

7 thoughts on “Fukushima: Two Years of Cover Up”