Georgia Guidestones: The Conspiracy that Inspired the Emmy-Award Winning Series 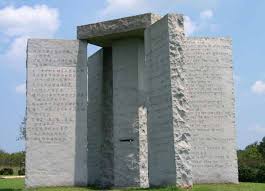 Erected in Elbert County, Georgia March 22, 1980, this enigmatic granite monument (sometimes referred to as the American Stonehenge) was instantly the centre of numerous conspiracy theories. Who built it? Why? And what do the guides on the stones actually mean? The Canadian Emmy-award winning series, Guidestones, explores the conspiracy surrounding the monument.

There are ten lofty guides or commandments inscribed on the stones in eight different languages. The first reads “Maintain humanity under 500,000,000 in perpetual balance with nature”. This is interpreted as evidence of an impending apocalypse orchestrated by such secret societies as the Freemasons, the Illuminati, the Bilderburg Group, the Rosicrucians, or some other elitist organization. As such the Georgia Guidestones are frequently considered to be a sinister warning and should be regarded with suspicion and fear.

After reading Randall Sullivan’s article in Wired Magazine in 2009, Guidestones creator and director, Jay Ferguson, was determined to make the stone monument the centre of his next project. With a small dedicated team, what he created became an international sensation, exploring the frontier of interactive digital media in a never before seen format.

The series follows an international journalism student, Sandy Rai, who quickly becomes caught in a global conspiracy while investigating an unsolved murder. The story adheres to the popular conspiracy theory and attributes the Georgia Guidestones to the Rosicrucians, an order similar to the Freemasons. The inscription “R.C. Christian” on the nearby instruction tablet indicates that this mysterious figure is the author of the Guidestones, but also admits, in subsequent parentheses, that this name is a pseudonym. As such many have assumed that it does not refer to a person at all but to the Order of Rosicrucian, a secret society, which first appeared in Protestant Germany in the early 17th century.

In modern times, several organizations, both religious and non-religious, identify themselves as Rosicrucian. Sandy’s search leads to her to the Ancient Mystical Order of Rosae Crucis (AMORC), a self-purported non-sectarian organization founded in 1915, which is dedicated to the teaching of philosophical and mystical principles in order to achieve a higher knowledge.  They claim their roots reach back to Ancient Egypt and, even though they would not admit to judge others, are the only true Rosicrucian Order. Other organizations speak of a true and invisible Rosicrucian Order to which all orders have a spiritual connection. This is the stuff of which great conspiracies and, as Guidestones proves, great stories are made.

Traveling around the world, Sandy uncovers a nefarious corporation, which has been developing next gen technology with the ability to trigger controlled natural disasters and cull the global population.  In the wake of this destruction and chaos they will form a New World Order.  Throughout Sandy’s investigation, she is met with challenges and mysteries she never expected including her own shocking connection to the conspiracy.

Sent to us by the author, Kara Dueck, The Guidestones Team

3 thoughts on “Georgia Guidestones: The Conspiracy that Inspired the Emmy-Award Winning Series”