A Georgia teacher who barricaded himself in his classroom and fired a handgun is in police custody.

Jesse Randall Davidson, 53, locked his students in the hallway and fired a shot when the principal opened the door, according to US media reports.

No students were hurt by the alleged gunfire but one sprained her ankle.

The incident came two weeks after 17 were killed at a Florida high school and President Trump called for teachers to be armed to tackle mass shooters.

When the headmaster attempted to open the door with a key, he heard a gunshot.

The school in Dalton – a city about 90 miles (145km) northwest of Atlanta – was placed on lockdown, the spokesman said.

A standoff lasting up to 45 minutes ensued before Mr Davidson was taken into custody. 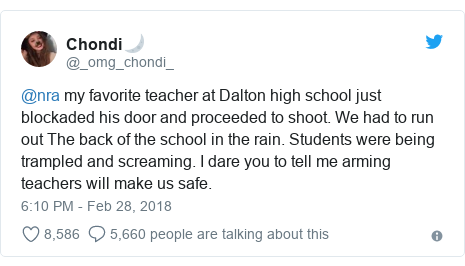 He is a social studies teacher and the announcer for the school football team, said Dalton police.

Investigators say a note was found on 21 February at the high school mentioning a threat against the building the following day, but it is unclear if that is related to Wednesday’s incident.

“It is really serious after so many things have happened all over the country,” student Ricardo Perez told television station WTVC after the incident.

“I’m shocked, I can’t believe it. I thought it was a dream.”

One Dalton student tweeted at the National Rifle Association to argue that giving teachers guns is a bad idea.