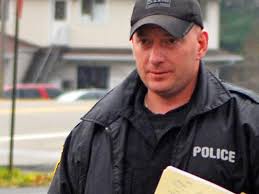 FRACKVILLE – The attorney for Gilberton’s suspended police chief said Tuesday that a councilman went door-to-door last week to encourage opposition to the chief.

Joseph P. Nahas, attorney for Chief Mark Kessler, held a press conference Tuesday at his office in Frackville and said that since the July 31 council meeting at which Kessler was suspended, he has obtained “alarming information” about a councilman.

“What we learned is that on the day of the meeting, an individual by the name of Eric Boxer, who is on council and who seconded (the motion to suspend Kessler), Mr. Boxer went around to the residents of Gilberton and was trying to garnish a vote to terminate Mr. Kessler. This is a councilman who is supposed to be objective, hear evidence and make a decision as a council member,” Nahas said.

“We were under the full assumption and belief that Chief Kessler had the support of his mayor and that he would have a fair hearing that day when they met in executive session. We didn’t know it was going to be a kangaroo court,” said Nahas, who added that he believes Kessler’s suspension will eventually become a termination.

Nahas asked three residents of Maizeville to come to his office to verify for the gathered media that Boxer had gone door-to-door to encourage opposition to Kessler. None of the residents were in the room where the press conference was held but they listened from the waiting room.

Walter Kuczynski said he didn’t feel pressured by Boxer and that he supports Kessler as a good borough police officer.

“I like Mark. He does a good job,” Kuczynski said. “I’m here to support the man. He takes care of the borough.”

“I got a visit from Boxer and I told him that Mark didn’t do anything to anybody in the town,” Dean said. “This has nothing to do with him being a policeman in Gilberton. I think he’s a great cop. We have troubles down there and when we call, he always comes right over. I think all this is about is they (council) just want a part-time policeman.”

William Weikel said that when he was approached by Boxer and another person at his home, he was asked about siding with those who want to remove Kessler as chief.

“I just told them to get off my property,” Weikel said.

Later in the press conference, Nahas said, “In my professional opinion, Mr. Boxer, if he has any animosity toward Mr. Kessler and could not be objective, he should not have been a part of the voting process and should have abstained.”

The controversy began when Kessler posted several profanity-laced YouTube videos in July that began drawing national and international attention. Kessler used automatic weapons in the videos and criticized U.S. Secretary of State John Kerry. Kessler maintains that he was defending his First and Second Amendment rights.

The Gilberton council voted 5-1 on July 31 to suspend Kessler for 30 days without pay for using the automatic weapons, which are borough property, without permission on personal time.

Nahas also said that he received a letter dated Aug. 1 from Gilberton solicitor Karen L. Domalakes that borough employees, including Kessler, may not “use the borough or their affiliation with the borough in any public statement, video, written document or the like without the express permission of borough council approved at a public meeting.”

Domalakes explains in the letter that in order for Kessler to comply with the policy, he “should remove any reference to his employment with the Borough of Gilberton from his YouTube posts and other Internet statements.” The letter adds that where possible, those borough references should be removed from the videos and any videos of Kessler in uniform should be removed completely.

“We’re in compliance and Mr. Kessler is working to remove any references to Gilberton borough from his sites,” Nahas said.

In Domalakes’ letter, she also requests that Kessler provide an inventory of the weapons currently registered in the name of the borough’s police department, as well as those that have been bought and sold and the locations of the weapons. The letter states that the weapons were purchased by Kessler “as per his contract.”

In his response to Domalakes dated Monday, Nahas wrote that since the borough had changed the locks at the borough building and since Kessler is suspended, he is unable to access the files on the weapons. The letter adds, however, that Kessler would provide that information if he is permitted access to the files.

Kessler was asked how many guns were bought and sold over the years that he has been with Gilberton. According to Mayor Mary Lou Hannon, Kessler has been a borough police officer for 14 years and police chief for about seven years.

“That’s in the files,” Kessler said of the guns. “Everything is in the files and if they grant us access, we’ll be more than happy to tell you. I am the person who acquired the weapons.”

When pressed on a rough estimate, Kessler said, “Less than 20. It really is hard to say because I have to through all the files. This is about 15 years of police work down there. I have a lot of files.”

Kessler said that some automatic weapons were “transferred” to other police departments around the country or to “Class III” dealers. He said that in some cases, police departments purchased the weapons, with the proceeds used to buy police supplies, ammunition and other gear.

“I get $200 a year for a uniform allowance, ammunition and whatever I need. Everything else comes out of my pocket,” Kessler said. “So, if I utilize some of these weapons for a few years and there is interest from police departments around the country, they submit their information, we do it up on a ‘Form 5’ (Application for Tax Exempt Transfer and Registration of Firearm) with the ATF (Bureau of Alcohol, Tobacco, Firearms and Explosives) and we submit it. The ATF approves everything. Your average citizen can’t go to a police department to buy this weapon from you because it’s a Class III weapon. That’s illegal. We can only transfer them to a police department or a Class III dealer with a letter from a police department requesting the transfer, and that has to be approved by the ATF.”

Nahas said that Kessler’s permission to buy and sell the weapons is in his contract, which he added is also locked in the borough building.

When asked to make a statement, Kessler said, “I’m a very good man. I’ve served my community for a very long time. Unfortunately, people painted me out to be a whatever you want to call it. I have a family, a wife, seven children and two grandchildren. I’m not a demon. I’m not a lunatic.”

Neither Boxer nor Domalakes could be reached for comment Tuesday.

Hannon confirmed that the locks were changed at the borough building, but she said there should be no problem to arrange a time when Kessler can see the files. She has not been contacted about any such request.

As for the accusations against Boxer, Hannon said, “I know what Mark had said about Eric but it’s not true. Eric acted as a councilman and was talking with his constituents to see how they feel.”