Glass-Bottom Bridge Built On Side of Cliff Cracks, Tourists Terrified

The epitome of STUPID or MADE IN CHINA.

Chinese tourist attraction open to the public just over two weeks has already had its first major mishap in that it managed to almost kill tourists. The glass skywalk suspended 3,450 ft in the air on the side of China’s Yuntai Mountain in the Henan Province cracked causing panic among visitors. 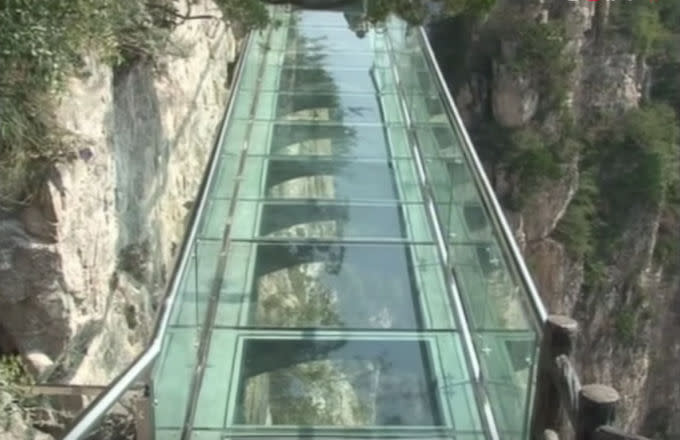 The incident made news after a 20-year-old woman posted three pictures of the cracked glass on Weibo, a Twitter-like social media site, along with messages. In them she described hearing a “bang” and feeling a “shake” before she looked down and saw that the glass floor had shattered. ‘I yelled out loud “It cracked, it really cracked!”, then pushed the people in front of me to leave. [I was] terrified.’

The walkway, which is 853 feet long, reportedly has 223 feet layered with three one-inch-thick glass panes that can reportedly hold 1763 pounds.

A spokesman for the Yuntai Mountain Scenic Spot said the cracks had been caused by a stainless steel mug dropped by a tourist, but explained that only one of the layers of glass had shattered, meaning tourists were safe. Well, as safe as you can be walking on a glass walkway 3,000-plus feet in the air.

3 thoughts on “Glass-Bottom Bridge Built On Side of Cliff Cracks, Tourists Terrified”