MSNBC’s Morning Joe anchor and former Florida Republican Congressman, Joe Scarborough, has been named by the red communists as the tip of the spear aimed at the heart of the 2nd Article to the people’s Bill of Rights, and the rest of the MSNBC communist propaganda broadcasts are the shaft attached to that spear.

Joe Scarborough has stated unequivocally that universal background checks, hence universal registration, will be passed forthwith and that any who stand in the way of this communist dictate will “be destroyed”.

Visit NBCNews.com for breaking news, world news, and news about the economy 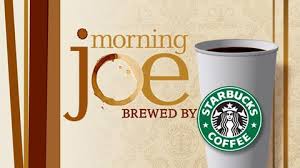 Scarborough’s three hour broadcast, Morning Joe, sports that it is powered by Starbucks and the Starbucks’ company logo is synonymous with the Morning Joe banner which states, “Brewed by Starbucks”.  As Scarborough proclaims that the government has a right to regulate, hence infringe, upon the people’s inalienable 2nd Article right to own and bear arms, he poses with a Styrofoam cup containing his morning joe and sporting the Starbucks logo.

We made no effort to contact the NRA in reference to this situation, as it has become common knowledge that the NRA is not but controlled opposition, interested only in wielding the power of we American nationals to enrich and empower themselves with the idea that they, as elite, will always be superior and right to the common folk that finance them.

I, representing From the Trenches World Report, did attempt to contact Larry Pratt, CEO of Gun Owners of America, and discovered that Mr. Pratt, like Mr. LaPierre, has subordinates to insulate him from we common folk.  In my correspondence, I described the problem and suggested that Gun Owners of America lead in a boycott of Starbucks.

I don’t know if Mr. Pratt was ever consulted, but his subordinate rejected the boycott, stating that Gun Owners of America was a political lobbying group and the boycotts they had participated in in the past, were only against gun makers, as this industry is in direct correlation with gun owners….and coffee isn’t?

The representative that emailed me back, Jason Weiser, further stated that Starbucks is pro 2nd Article because they allow people in open carry states to openly carry into their establishments.  I guess Mr. Weiser thinks we are stupid as no establishment in an open carry state can forbid their customers from exercising their right to openly carry.

It works like this, you openly carry your gun into a Starbucks, you purchase one of their overpriced cups of coffee, you hand them your money, they then turn around and hand a portion of that money over to MSNBC and Joe Scarborough, who then uses the airtime purchased, in the push to remove your 2nd Article right and hence your gun.

Though I have liked what I have heard from Larry Pratt, I believe GOA at its core is no different than the NRA, just another group of elitists looking to harness the power of we individuals into a collective as a way to their own means.

This is the reality.  If anything is to be done about Starbucks open support for the red communists’ gun confiscation agenda, we shall have to accomplish that feat as individuals.

Boycott Starbucks products at every instance and withdraw your membership from the elite establishments NRA and GOA, who are telling us emphatically that the only remedy they offer is to use our money and stature to bribe and coerce within the corrupt system.  And of course in the end, there will be compromise.

Both organizations refuse to stand on our 2nd Article as written: absolute, inalienable, and not to be infringed upon.

“Who are the militia? Are they not ourselves. Congress have no power to disarm the militia. Their swords, and every other terrible implement of the soldier, are the birth-right of an American. The unlimited power of the sword is not in the hands of either the federal or state governments, but, where I trust in God it will ever remain, in the hands of the people.”

Forget about the collective NRA and GOA.  We American nationals must take care of and defend ourselves as our founders intended.

Boycott Starbucks as an individual and make sure the NRA and GOA understand that they do not represent your power and your will and they cannot control you and use you to punish or protect any corporation to gain political advantage for their goals of self preservation as an elitist body apart from the rest of us.

If you care about your 2nd Article right, spread this article and the boycott to every corner of the internet through every means available.