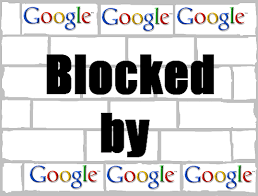 It would appear from initial Google searches performed from April 25th through 28th that Google has determined that the only way to control Alternative Media researcher is to discontinue viewing cached site contents.

One will notice that when doing a Google search, the Cached results are barely available for postings that are online for 18 hours or less. In addition to this censorship, Google has determined that providing an image is no longer in the intelligence agencies best interest. This is a policy of government influenced control, or rather, the actual power behind Google is now demanding censorship of the once available content.

Cached content is still available, but without images to view, one is significantly handicapped in quickly locating relevant content or previewing the site, as was once possible.

As most know, Google is the largest search engine on Earth, and its rise to power and consolidation of content is a clear indication of not only government/intelligence funding, but protection.

In-Q-Tel of Arlington, Virginia, United States is a not-for-profit venture capital firm that invests in high-tech companies for the sole purpose of keeping the Central Intelligence Agency, and other intelligence agencies, equipped with the latest in information technology in support of United States intelligence capability.[4]

In-Q-Tel is the venture capital arm of the CIA.

In-Q-Tel is the corporate funding arm of the Central Intelligence Agency CIA – this is a well documented fact as the Wikipedia article explains. Along with scientific research and technology, social media are the major player today. DARPA is a similar government agency that controls enormous funding that is invested in promising ideas – primarily social media in that it facilitates controlling and understanding the population globally.

Research by James Corbett of CorbettReport.com explains in great detail the In-Q-Tel and CIA cooperation as well as many other corporate entities whose business it is to create advanced software to facilitate spying on not only the American Public, but the global population – an excerpt:

Recorded Future Inc. is a Massachusetts web startup that monitors the web in real time and claims its media analytics search engine can be used to predict the future.

The common denominator? All of these companies, and hundreds more cutting edge technology and software startups, have received seed money and investment funding from In-Q-Tel, the CIA’s own venture capital firm.

Here is an excerpt from the corbettreport.com James Corbett Interviews Jordan Kaufman 10/12/2009

JC: Well, that’s right – those tricks still continue today. And that’s why the CIA has front venture capital firms likeIn-Q-Tel which provide seed money to Facebook[5], which then becomes all the rage – and accomplishes exactly what the US government was attempting to do with the Information Awareness Office – which was: create these vast relational databases, so that they could track who was interacting with who. Well, now we all sign up and give that information for free to Facebook, and whoever is behind Facebook for free. And we actually enjoy doing it. So they do know how to manipulate the human being.

More importantly, Google has censored a critical article by RT.com that explains from NSA Whistleblower William Binney. The entire article is reproduced for archive purposes and to inform the public that your privacy has been completely removed by the government intelligence agencies – including Google with its tracking of every link you go to online, which laughably they state is for marketing purposes.

In-Q-Tel is a CIA-linked venture capital firm that often funds companies viewed as having the potential to develop capabilities of use to the intelligence community, such as Palantir. Some employees, such as CISO Daniel Geer Jr., have been vocal in their concerns about the dangers that may arise from the intelligence contracting industry.

‘Everyone in US under virtual surveillance’ – NSA whistleblower

Victor Hugo – A Brief Summary of his Life

Carrier IQ claims it wants to be transparent about its monitoring of smart phones.

Silicon Spies: The US government and the tech revolution