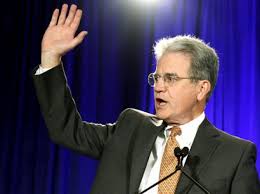 WASHINGTON — A conservative senator is proposing to greatly broaden the background check system for firearms purchasers but require no records of the transactions as the Senate braced for votes on amendments to gun control legislation next week.

The plan by Sen. Tom Coburn (R-Okla.) was one of several proposals Republicans were discussing in preparation for debate. In response to December’s elementary school attack in Newtown, Conn., which killed 20 children and six adults, the Senate is considering a Democratic bill backed byPresident Barack Obama that would expand background checks, strengthen laws against illegal gun trafficking and slightly increase school security aid.

The possible GOP amendments, described by aides and lobbyists, include one requiring states to recognize permits for carrying concealed weapons issued by other states. Many gun control advocates oppose the idea vehemently because some states’ standards for issuing the permits are considered weak, and such a provision, if approved, might cause some to rethink support for the overall bill.

It was unclear who might introduce it, but two lobbyists mentioned Sen. John Thune (R-S.D.).

Sen. Charles Grassley (R-Iowa) is working on a sweeping measure prodding states to send more records to the federal background check system, which is designed to prevent guns from going to criminals and those with serious mental health problems.

It remains unclear what GOP amendments the Senate will vote on. The aides and lobbyists requested anonymity because they were not authorized to discuss the still-incomplete proposals publicly.

Another proposal, by Sens. Lindsey Graham (R-S.C.) and Mark Begich (D-Alaska) is aimed at making sure people with certain mental problems are barred by background checks from getting firearms, the sponsors say. Critics say it would end up reducing mental health records available to the system and make it easier for some people with serious problems to get guns.

Coburn described his plan in a letter to colleagues. It seemed the proposal would face a difficult path to the 60 votes it would need to survive, if it is voted on at all.