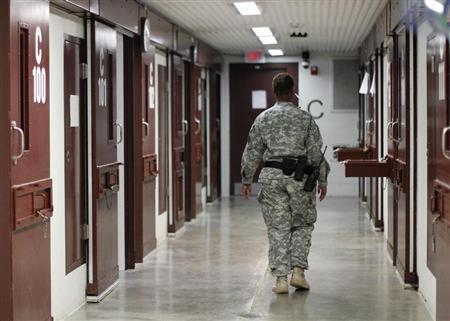 (Reuters) – About 24 Guantanamo prisoners involved in a hunger strike that began six weeks ago are upset by the U.S. government’s failure to close the detention camp and hope to gain publicity for their plight, a Marine Corps general said on Wednesday.

General John Kelly, the head of U.S. military forces in the Latin America region, flatly rejected allegations from some prisoners that copies of the Koran had been mishandled, calling the claims “nonsense.”

“No way has the Koran in any way, shape or form been in any way abused or mistreated,” said Kelly, who told reporters he had been presented with copies of the “sacred Koran” by senior Muslim clerics during his three tours of duty in Iraq.

He told a Pentagon briefing that while it was acceptable for a nonbeliever to touch the Koran, in fact the only members of the Guantanamo staff who would ordinarily handle Korans would be translators, all of whom are Muslims.

Periodic hunger strikes have occurred at Guantanamo since shortly after the prison opened in January 2002 to house suspects captured in overseas counterterrorism operations after the September 11, 2001, attacks.

The prison has 166 inmates. Nearly all have been held for 11 years without charge, and about half have been cleared for transfer or release. Many are Yemenis who the United States will not repatriate at this time because of instability in that country.

More than 50 lawyers representing the prisoners sent a letter to Defense Secretary Chuck Hagel last week urging him to help end the hunger strike, which they said began on February 6 to protest the confiscation of letters, photographs and legal mail, and the rough handling of Korans during searches of their cells.

They said the participants’ health had deteriorated alarmingly, and that some had lost more than 20 or 30 pounds (9 to 14 kilograms). Kelly said the prisoners who spoke to Guantanamo staff cited other reasons for the strike.

“They had great optimism that Guantanamo would be closed. They were devastated apparently … when the president backed off, at least (that’s) their perception, of closing the facility,” Kelly told the House of Representatives Armed Services Committee in Washington.

Captain Robert Durand, a spokesman at the detention camp, said 24 Guantanamo captives were on a hunger strike and eight had lost enough weight that doctors were force-feeding them liquid nutrients thorough tubes inserted in their noses and into their stomachs. Two were hospitalized with dehydration, he said.

The number of hunger strikers had grown from 14 on Friday, Durand said.

Kelly, who took over as head of U.S. Southern Command in November, said most of the prisoners took their food communally, making it difficult to determine whether they had skipped nine consecutive meals, the definition for a hunger strike at Guantanamo. He said some had snacks in their cells.

“Generally speaking, we think about 24 of them are on, say, hunger strike light, where they’re eating a bit but not a lot, but they’ve declared that they’re not eating,” Kelly told reporters at the Pentagon.

He said the detainees who are being force-fed “present themselves daily, calmly, in a totally cooperative way, to be fed through a tube,” adding “we also know they’re eating when they’re in their cells.”

Upon taking office in 2009, President Barack Obama ordered the detention camp closed within a year, but Congress has blocked administration efforts to shut it down and made it increasingly difficult to resettle Guantanamo prisoners.

Obama did not mention Guantanamo in his January inaugural speech or his February State of the Union address, which some of the prisoners watched on television. In January, the State Department office charged with resettling Guantanamo prisoners was closed.

“That has caused them to become frustrated and they want to … turn the heat up, get it back in the media,” Kelly told lawmakers. “And we know that because they talk to us. We have actually a fairly positive relationship down there with most of the detainees.”

The United States spends $114 million a year to run the Guantanamo prison, or about $687,747 per prisoner, according to the Government Accountability Office. That is about 20 times what the U.S. Bureau of Prisons spends per inmate to run its high-security prisons.

“President Obama is at a fork in the road. He can invest in Guantanamo or invest in justice,” said Zeke Johnson, head of Amnesty International’s Security with Human Rights Campaign.

“Why throw more money down the drain on a mission that has already failed? Instead of justice for the 9/11 attacks, Guantanamo has brought us torture, indefinite detention, unfair trials and hunger strikes.”