Gunman who opens fire in Studio City dies at the scene

He went outside and saw people running down Ventura Boulevard, away from a curly haired man holding a gun. The man fired two shots into the air, Gilmartin said, then two more toward the ground.

As the man sat on a brick ledge outside a Union Bank, he looked calmly from side to side, Gilmartin said.

“It was so bizarre,” he said. “He looked like he was just waiting for the cops.” 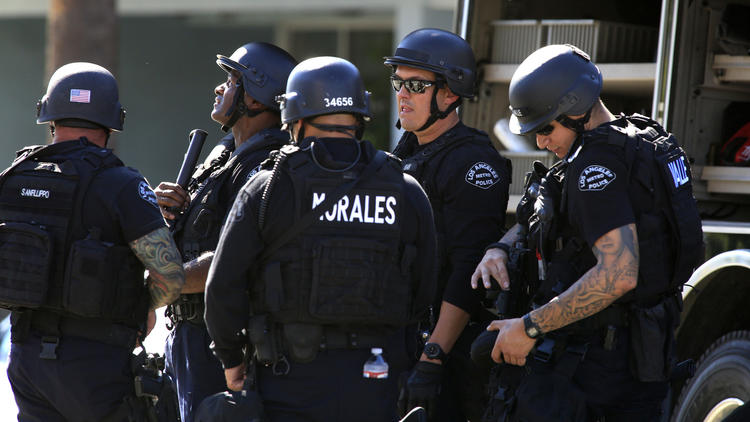 Officers soon pulled up and took cover behind their patrol car doors, yelling for the man to drop the gun, Gilmartin said. When the man raised his weapon, Gilmartin jumped behind a tree.

Gunshots rang out. When Gilmartin looked up, he said, he saw the man slumped over in a flower bed.

Chaos erupted along the busy stretch of Ventura Boulevard about 3:20 p.m., when police received reports of a man with a gun near Vantage Avenue. Terrified witnesses peered out of store windows and from behind cars as police fired on the man, who died at the scene.

But the drama continued even after the gunfire stopped. Helmet-clad police officers swarmed the scene. Rumors swirled that the man had robbed a bank. (That was not the case, authorities said.) Buildings were evacuated as an LAPD robot examined at least two items near the man’s body that police feared were explosive.

By Friday night, it was still unclear who the man was or why he opened fire, Los Angeles police said. Ventura Boulevard was closed for hours as investigators combed the scene.

“A lot will depend on making this identification and then working backwards,” Det. Meghan Aguilar said. “Who was this person and what drew him here?”

Aguilar said the man was struck by police gunfire but it was unclear whether he might also have had self-inflicted wounds.

No other injuries were reported, though police said a female officer stationed at the perimeter of the scene was treated for a heat-related illness.

Ken LaZebnik watched from the front door of his office as the police robot scooted around the man’s body, picking up a metal cylinder and taking it to a nearby driveway. LaZebnik saw a puff of smoke and heard a loud noise — like an M-80 firecracker, he said — and the object was destroyed.

The robot returned to the man’s body, LaZebnik said, and appeared to examine it with a camera. Later, he said, the robot dragged away a black briefcase and detonated it as well.

Aguilar said the LAPD’s bomb squad detonated an object near the man’s body that “appeared to be explosive in nature” but wasn’t. She said the bomb squad also examined the man for any possible explosives before officers approached and confirmed he was dead.

No explosives were found, she said, but a handgun was recovered at the scene. Aguilar said investigators were speaking with witnesses and looking for surveillance cameras that may have captured the incident.

As with all LAPD shootings, the incident will be reviewed by the district attorney’s office, the Police Commission and its inspector general.

It was not clear how many officers fired. Witnesses said they heard two shots; three can be heard on video taken at the scene.

Wyatt Torosian filmed some of the aftermath, showing an officer pointing his gun at the man’s body crumpled over the brick ledge. Torosian said he watched the shooting from inside a nearby Starbucks.

When the gunfire broke out, he said, panicked customers ran from the windows and hid behind the coffee bar.

“It was surreal,” he said. “It seemed like something out of the movies.”