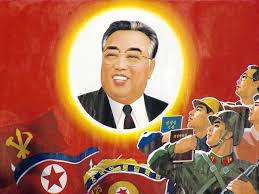 Today would have been North Korean leader Kim Il-Sung’s 105th birthday and it is being speculated that his grandson, Kim Jong Un, may fire a missile as a part of a test to commemorate the day.  The event may have already occurred by the time this article is released as the 15th was yesterday in North Korea.

This whole North Korean fiasco has to be described as one of the most blatant smokescreens to be thrown up within the 21st century.  The powers that be know that this missile test is really so insignificant as to not even warrant mention, but are using their mainstream propaganda machine to create as much tension through confusion as possible.

The so called news comes on at the top of the hour sporting the headline, “North Korea to launch nuclear missile”, then goes on to name possible US interests that could be targeted in the region.  Then the discussion moves to possible targets within the United States, including Hawaii and Austin, Texas.  And then the speculation goes wild, as it is debated as to whether the North Koreans can even so much as produce a single warhead that they can pair with one of their current missile systems.  Then finally, the truth of the matter comes out, “This is just a test”, not unlike many other tests in the past.

Meanwhile, while segments of the mindless populations of the US are entranced, the communists continue to push for the speedy disarmament of the American people before the inevitable economic crash that is set to befall us.

It has been the M.O. of the Zionists to only show the disastrous state of our economy coming up on an election as they are forced to do so because in reality, this is the number one issue on the minds of the American people.  Once they have made it through another election, they go right back to pushing the international communist agenda and not a word is heard in reference to the ongoing collapse.

Of course the North Koreans are in full cooperation with the agenda as they will be once again granted aid to provide food for their people.  The Chinese likewise cooperate because the American taxpayer ends up paying to feed what is in reality a Chinese owned slave population.

I have to believe at this point in the ball game that the real conflict internationally is between the corporate elite themselves, as those at the top want the third world war and the implementation of the new world order, while those participants beneath them, though they also want the implementation, are finding it hard to stop stealing long enough to get the deed accomplished.

But do not fear, the Zionists by their own assertion are a breed apart.  That being so, they are, at this moment, scheming to transform one of these smokescreens into a real event via a CIA/Mossad engineered false flag.

God pray that the international evil implode in upon itself.