Have Greek Politicians Hired Foreign Mercenaries For Protection From The Greek People? 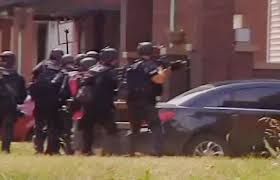 The Last Resistance – by Mark Horne

Remember Blackwater from Iraq? Sure you do. In fact, the company has been worried about what you would remember. So they changed their corporate name from Blackwater to Xe Services and then to Academi. But they are still the same private freelance military—guns for hire.

Recently there was a news story that the Greek Parliament has hired them as bodyguards. In fact, even though the story just made some news in the US, it has been going on all month, and was reported by the Canadian media but was ignored elsewhere. Wikipedia has an un-footnoted description:

“On February 1, 2013, Greek news site DefenseNet (www.defencenet.gr), citing Canadian newspaper sources, reported that Academi had been hired to provide security service to the Greek Parliament. The contract is alleged to have been signed by former Parliament President Evangelos Meimarakis, a close associate of former prime minister Costas Karamanlis. During Meimarakis’ tenure, the Greek Parliament had been repeatedly surrounded by thousands of demonstrators chanting ‘Burn, burn, let that brothel burn.’ Meimarakis, known for his colourful language, had recently been alleged to have ties to an alleged multi-billion tax evasion and corruption scheme run by fugitive Greek businessman G. Karouzos.”

If this Wikipedia entry is accurate, then it is understandable that the workers at “the brothel” are nervous. They have decided they need bodyguards but Greek bodyguards won’t do. Recently, the New Statesman confirmed the Wikipedia story about Academi. They interviewed and ex-diplomat who has predicted that Greece is about to explode in civil unrest.

“Chrysanthopoulos says that the government has hired Blackwater, the American private military firm infamous for its activities in Iraq, which now goes by the name “Academi”, along with five other international for-profit security outfits. Explaining why this has happened, he says bluntly: ‘The Greek government does not trust the police whose salaries have also been cut.’”

Academi, however, has issued a denial:

“UPDATE: Academi have rejected Mr Chrysanthopoulos’s claim. According to a spokesperson for Academi, the firm ‘does not now, nor have we ever, provided security services to any entity of the Greek government.’”

It is hard to know who to believe. To claim there are “five other international for-profit security outfits” being used by the Greek government seems like a pretty specific claim. Academi isn’t claiming that no other private security is being used. I have to wonder if their usual employees are contracted out to other companies so that Academi has plausible deniability. In any case, we still have testimony that mercenaries are being used.

So what happens when Greek society starts openly revolting against Parliament? Will the government use a mercenary army? And what about Italy and Spain? What happens when they lose confidence that their government really represents their interests? Or will the EU hire them to bring one of those countries back in line?

Mercenaries have been the traditional tool of kings attempting to re-assert themselves on their people against their will. After all, if your army is from your own kingdom, then you have the risk that they will refuse to attack their brothers, sisters, parents, and children. Better to use mercenaries who think of them as foreigners. In American history, King George hired German mercenaries to sail to the coast of North America and assist in defeating and punishing the “rebels.”

Think of what might happen if austerity hits the U.S. and police realize their pensions don’t exist. Blackwater has already been used during Hurricane Katrina. Will DHS hire them to “keep the peace”?  The Statesman’s source said of Greece, “We are heading down the road of destruction.” I fear it may not only be Greece.