Last year, Hanahan police made headlines when two teenagers were killed as a result of a high-speed police chase. According to the South Carolina Highway Patrol, a Lexus was trying to outrun Hanahan police when it went off the roadway minutes after officers tried to stop the car for a traffic violation.

The chase ended when the Lexus crashed in the woods at the end of Foster Creek Road. Just before the crash, the police officer can be heard on the video saying that the Lexus had exceeded 100 mph.

Four people were in the car at the time of the crash. Nineteen-year-old Patrick Graham of North Charleston was pronounced dead at the scene by Coroner Salisbury of the Berkeley County Coroner’s Office.

Another man, also from North Charleston, 18-year-old Martin Pinckney, was transported to MUSC where he later died. Both men died from head and body trauma. 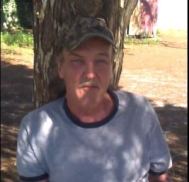 Most recently, 59-year-old Dana Hughes was killed after being run over twice during as police engaged in a high-speed chase, once by the person police were chasing and once by the police in pursuit.

The cause of this particular high-speed chase? It seems that 29-year-old Sidney Lamar Foy was driving on a suspended license. This is not a ‘major crime’ that should justify endangering the officer’s life, the suspect’s life, or the lives of innocent bystanders. In fact, it should have be nothing more than a civil matter.

In the end, an innocent man lost his life because an over-zealous police officer wanted to make an arrest, which in all likelihood was brought on by some type of department sanctioned quota.

Deadly Police Chases – By The Numbers 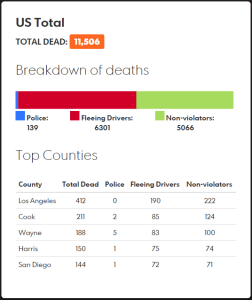 Since 1979, almost 12,000 people have been killed because of police chases. According to USA Today, 1% of those deaths were police officers and a little over half were the drivers of fleeing vehicles, but the rest were innocent bystanders or passengers. Data from the International Association of Chiefs of Police show that out of 17,000 chase records across the country since 2001, 92% of them started because of a misdemeanor, traffic infraction, or a non-violent crime.

What does the Department of Justice think about these types of police chases? According to a DOJ  document, it states, “For anyone other than a violent felon, the balance weighs against the high-speed chase.”

Several states, like Michigan, have either introduced or passed legislation aimed at preventing out-of-control police from initiating deadly police chases.