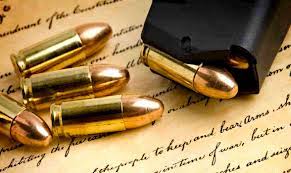 Public figures are more honest when they think no one is watching or listening.

The New Jersey legislature archives their sessions and uploads them to their website for all to listen to. What some of these legislators didn’t realize was that the mic was still on and could pick up what they were saying.

The New Jersey Second Amendment Society found some audio that shows what these gun control politicians really want. At the end of a Senate Budget and Appropriations Committee meeting, you can hear a group of state legislators talking about gun owners and gun confiscation. These are among the statements that were picked up:

“They want to keep guns out of the hands of bad guys but they don’t have any regulations…to do it.”

“They don’t care about the bad guys. All they want to do is to have their little guns and do whatever they want with them.”

Since there’s no video, it’s difficult to discern who the legislators are that made these statements. A couple of news sources have speculated that those conversing are likely to be State Senators Loretta Weinberg, Sandra Cunningham and Linda Greenstein, all Democrats. And yes, all women. (Is that sexist?) You can listen to the relevant portion of the audio here:

If what they’re saying is what it sounds like, that what they really want to do is confiscate people’s firearms, and they’re complaining that they can’t do that just yet, then it’s not really that shocking. This is what we’ve been saying for some time now. And they were always the ones that kept saying, “No one’s coming for your guns.” To quote one of these gun-grabbers, that’s the line they’ve developed.

The 2nd Amendment was written to protect citizens from the likes of these state senators.