How Harmless are the Sequester Cuts Really? 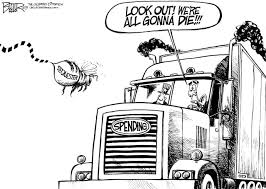 Well, the sequester was enacted, seemingly without notice or effect upon the life of the average American.  I guess it wasn’t really any big deal. I guess the propaganda campaign was a success.  I have harped on the fact that $85 billion in austerity cuts is indeed a minute amount in comparison to the trillions being given over to the international elitist bankers, year after year.

So, what was the idea here?  Predict doom and gloom that you know is a farce with the controlled opposition declaring that the austerity is actually a good thing.  And then, once the cuts have gone through, put forth a full blown propaganda campaign that says, “The economy has improved drastically since the sequester” with the full knowledge that a measly ass $85 billion is no more going to make us than break us, with the whole agenda being to get the people to embrace austerity as a positive and good thing, while completely dismissing the fact that austerity is a socialist procedure that can only be implemented in a socialist country under a socialist government.

Now we the people, in accepting the austerity and in many cases even embracing it, have also accepted and embraced socialism, which dictates that all property is the possession of the government to be distributed and/or re-distributed as the government sees fit, with the best interests of the corporate collective being the only consideration, as the people under socialism, exist only to serve the state.

At any rate, we have now gone from a free Republic, belonging to the people as individuals, to a socialist state enacting austerity, which is being portrayed as a good thing this time around, as only the nose of the camel is visible within the tent.  I guess all those who have ignored this coup d’etat stand to be snapped back into reality when the rest of the camel bursts into their living quarters to drive them out into the cold dark night.

6 thoughts on “How Harmless are the Sequester Cuts Really?”