Human Farm: The Story of Your Enslavement 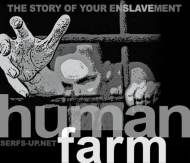 From Sovereign to Serf

Whether you think of it as an analogy or as an accurate portrayal of the human condition, Stefan Molyneux’s controversial essay about the rise and (hopefully) fall of the tax farmer will make you think. Early humans could only produce what they consumed. There was no excess for a slave master to steal, so there was no point owning slaves. However, when agricultural improvements allowed for excess crop production, human ownership became an advantage. History tells us that early governments were in fact a ruling class of slave hunters who believed that because humans could produce more than they consumed, they were worth capturing, breaking in and owning. Early Egyptian and Chinese empires were in reality human farms where captured humans were domesticated and owned like any other livestock. – KK

Human Farming: The Story of Your Enslavement

This is the story of your enslavement; how it came to be and how you can finally be free.

Like all animals, human beings want to dominate and exploit the resources around them. At first, we mostly hunted and fished and ate off the land – but then something magical and terrible happened to our minds.

We became, alone among the animals, afraid of death, and of future loss. And this was the start of a great tragedy, and an even greater possibility…

You see, when we became afraid of death, of injury and imprisonment, we became controllable — and so valuable — in a way that no other resource could ever be.

The greatest resource for any human being to control is not natural resources, or tools, or animals or land — but other human beings. 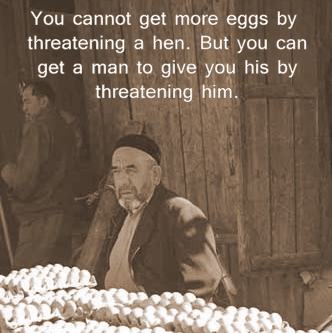 You cannot threaten a cow with torture, or a sheep with death. You cannot swing a sword at a tree and scream at it to produce more fruit, or hold a burning torch to a field and demand more wheat.

Human farming has been the most profitable — and destructive — occupation throughout history and it is now reaching its destructive climax.

Human society can not be rationally understood until it is seen for what it is: a series of farms where human farmers own human livestock.

Some people get confused because governments provide healthcare and water and education and roads, and thus imagine that there is some benevolence at work.

Nothing could be further from reality.

Farmers provide healthcare and irrigation and training to their livestock.

Some people get confused because we are allowed certain liberties, and thus imagine that our government protects our freedoms.

But farmers plant their crops a certain distance apart to increase their yields — and will allow certain animals larger stalls or fields if it means they will produce more meat and milk.

Are you beginning to see the nature of the cage you were born into?

There have been four major phases of human farming:

PHASE ONE: Direct and Brutal Slavery in Ancient Egypt

The first phase, slavery in ancient Egypt, was direct and brutal human compulsion. Human bodies were controlled, but the creative productivity of the human mind remained outside the reach of the whip and the brand and the shackles. Slaves remained woefully under productive, and required enormous resources to control.

PHASE TWO: Roman Slaves Are Free to Show A Modicum of Ingenuity

The second phase was the Roman model, wherein slaves were granted some capacity for freedom, ingenuity and creativity, which raised their productivity. This increased the wealth of Rome, and thus the tax income of the Roman government – and with this additional wealth, Rome became an empire, destroying the economic freedoms that fed its power, and collapsed.

I’m sure that this does not seem entirely unfamiliar.

After the collapse of Rome, the feudal serfdom model (and here, too) introduced the concept of livestock ownership and taxation. Instead of being directly owned, peasants and serfs farmed land that they could retain as long as they paid off the local warlords. This model broke down due to the continual subdivision of productive farm land, and was destroyed during the Enclosure movement, when land was consolidated and hundreds of thousands of serfs were kicked off their ancestral lands, because new farming techniques made larger farms more productive with fewer people.

The increased productivity of the late Middle Ages created the excess food required for the expansion of towns and cities, which in turn gave rise to the modern Democratic model of human ownership.

As displaced serfs and peasants flooded into the cities, a huge stock of cheap human capital became available to the rising industrialists – and the ruling classof human farmers quickly realized that they could make more money by letting their human livestock choose their own occupations.

Under the Democratic model, direct slave ownership has been replaced by the Mafia model. The Mafia rarely owns businesses directly, but rather sends thugs around once a month to steal from the business “owners.”

You are now allowed to choose your own occupation, which raises your productivity – and thus the taxes you can pay to your masters.

Your few freedoms are preserved because they are profitable to your owners.

The great challenge of the Democratic model is that increases in wealth and freedom threaten the tax farmer. The ruling classes initially profit from a relatively free market in capital and labor, but as their human livestock become more used to their freedoms and growing wealth, they begin to question why they need rulers at all.

Ah well. Nobody ever said that human farming was easy.

Human Livestock Management | Human Farming: The Story of Your Enslavement

Keeping human livestock securely in the compounds of the ruling classes is a three phase process.

The first phase is to indoctrinate the young through government “education.” As the wealth of democratic countries grew, government schools were universally inflicted in order to control the thoughts and souls of the livestock.

The second phase is to turn citizens against each other through the creation of dependent livestock.

It is very difficult to rule human beings directly through force — and where it can be achieved, it remains cripplingly under productive, as can be seen inNorth Korea. Human beings do not breed well or produce efficiently in direct captivity.

If human beings believe that they are free, then they will produce much more for their farmers.

The best way to maintain this illusion of freedom is to put some of the livestock on the payroll of the farmer.

Those cows that become dependent on the existing hierarchy will then attack any other cows who point out the violence, hypocrisy and immorality of human ownership.

Freedom is slavery, and slavery is freedom.

If you can get the cows to attack each other whenever anybody brings up the reality of their situation, then you don’t have to spend nearly as much controlling them directly. 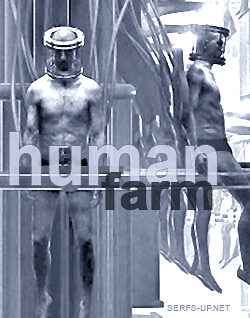 The human livestock are kept enclosed by shifting the moral responsibility for the destructiveness of a violent system of slavery to those who demand real freedom.

The Third Phase is to invent continual external threats, so that the frightened human cattle cling to the “protection” of the human farmers.

This system of human farming is now nearing its end.

The terrible tragedy of the modern American system has occurred not in spite of, but because of past economic freedoms.

The massive increases in American wealth throughout the 19th century resulted from economic freedom — and it was this very increase in wealth that fed the size and power of the state.

Whenever the livestock become exponentially more productive, you get a corresponding increase in the number of farmers and their dependents.

The growth of the state is always proportional to the preceding economic freedoms.

Economic freedom creates wealth, and the wealth attracts more thieves and political parasites, whose greed then destroys the economic freedom.

In other words, freedom metastasizes the cancer of the state.

The government that starts off the smallest will always end up the largest.

This is why there can be no viable and sustainable alternative to a truly free and peaceful society.

A society without political rulers, without human ownership, without the violence of taxation and statism…

To be truly free is both very easy, and very hard.

We avoid the horror of our enslavement because it is painful to see it directly.

We dance around the violence of our dying system because we fear the attacks of our fellow livestock.

But we can only be kept in the cages we refuse to see.

To see the farm is to leave it.

4 thoughts on “Human Farm: The Story of Your Enslavement”