Insurgents from the South Growing Bolder 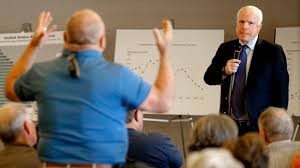 We here at From the Trenches have been chronicling the foreign invasion from the south and sounding the warning for a good long while now, and it is truly amazing how far the invasion had to reach before the average American was able to grasp the idea that the invasion was indeed an invasion for the conquest of our nation and its wealth.

Last week at a town hall meeting in Arizona, the traitor John McCain was confronted by a group of Americans who had come to see the invasion for what it is.  McCain met the objections of his constituents to the ongoing invasion with unbridled contempt, sneering hatefully at those who refused to accept his shoddy presentation of the shoddy con that has been used, time after time, year after year, decade after decade, to facilitate this foreign invasion.

McCain’s constituency became visibly enraged when the old liar tried to put forth the notion that these invaders do not take welfare and do support themselves.  McCain was taken aback when his status as an aristocratic elitist was reduced to that of a disobedient public servant.  How dare a common taxpayer question his authority?

I wonder what it was that brought those people in Arizona to the brink of violent confrontation at a town hall meeting.  Could it be the fact that Mexican lawmakers are now demanding the registration of all gun owners in the border states and that the names thereof be turned over to the Mexican government?  Or maybe it is the in-your-face dual citizen Hispanic insurgents, infiltrated within the US government, that are putting forth the demands of foreigners and threatening to vote out any politician that does not acquiesce to those demands.

Any and all foreigners who have entered this country in violation of our law are foreign invaders with hostile intent and now the people are finally seeing that the arbitrary granting of the various amnesties over the years has had nothing to do with being humane, but rather with allowing an enemy force to establish itself and begin dismantling our Republic from the grass roots.

We have defeated the Mexican nationals in two previous wars and are quite capable of doing so again.  All we really need to do is realize that those in Washington DC, trying to control us, are in league with the foreign invaders.  And to look at these government insurgents in any way as a mediator is to allow them to dictate the terms of our surrender to them.

We need to become vocal on every front as to our opposition to the invasion, as the propagandists are using their media to portray we American nationals as sympathetic to our takeover, just like they try to portray us as wanting to be disarmed.  We all need to let everyone around us know that we in no way acquiesce to the foreign invasion and that if they do, we will consider them as traitors to the Republic, as in reality that is exactly what they are.

Let them choose between our side and facing the 20% that make up the communists or the communist’s side in facing the 80% that make up American nationals.  The communists offer the illusion of power.  Let the fence walkers know that we are the reality of power and that all traitors are going to be brought to justice and all foreign invaders driven out or killed.  We can no longer afford to be passively politically correct in acquiescing to the assertions of our enemies.

4 thoughts on “Insurgents from the South Growing Bolder”