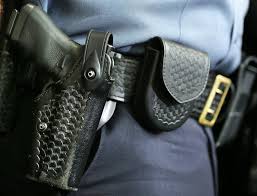 The Blaze – by Billy Hallowell

There’s an investigation unfolding in Missouri after it was revealed that the Missouri State Highway Patrol handed over concealed carry data to federal authorities. On at least two occasions – the latest of which was January — weapons data was delivered to the feds, according to an article published in the Columbia Daily Tribune.

In looking into the matter, officials noted that in Nov. 2011 and this past January, the patrol asked for the entire list of 185,000 concealed carry residents from the state’s Division of Motor Vehicle and Driver Licensing. Then, this information was apparently shared beyond the state’s boundaries.

This new information came out during hearings to investigate a revised driver licensing system, substantiating fears that gun information has been shared with federal officials.

Under state law, concealed weapon permit holders are confidential. As the Tribune notes, the only place where owners’ identities are stored is in driver license records. Those with a permit also have a special mark on their licenses pinpointing this designation.

State Sen. Kurt Schaefer, a Republican, has been looking into the new licenses and he is at the center of the discussion and investigation surrounding the handing over of information; the information about the highway patrol’s data sharing came out during questioning in the state’s Senate Appropriations Committee.

According to Schaefer, he was told that the list was given to federal authorities by the state highway patrol.

“Apparently from what I understand, they wanted to match up anyone who had a mental diagnosis or disability with also having a concealed carry license,” the senator explained. “What I am told is there is no written request for that information.”

Scharfer plans to push Col. Ron Replogle, superintendent of the Missouri State Highway Patrol, for additional answers during a hearing being held on Thursday morning. The Tribune has moreabout the concealed carry permit delivery to feds:

The patrol responded by confirming that it had shared the list of concealed weapons holders with federal authorities.

Schaefer has a plethora of questions about the data and why it was given to federal authorities. Of particular note, he’s wondering where the list ended up going once it reached the feds and how the request was granted in the first place.

“I want to know who all was involved in this transaction because if this is just some phone call saying give me the list of all concealed carry holders, how did the person at the patrol who fulfilled that request know who was at the other end of the phone?,” the senator asked. “How did they know where to send it? How did they know what it was being used for?”

Considering how mental illness could be playing into confiscation efforts in states like New York, this story and others like it are increasingly important to explore.