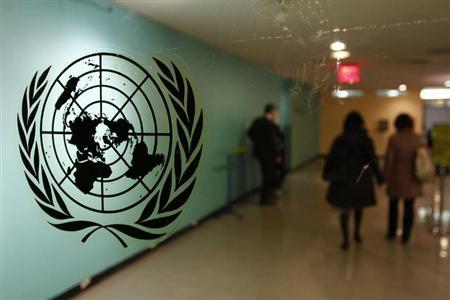 The Daily Journal – by Edith M.

UNITED NATIONS — Iran, North Korea and Syria blocked adoption Thursday of a U.N. treaty that would regulate the multibillion-dollar international arms trade which required agreement by all 193 U.N. member states.

In an unexpected twist, Mexico proposed that the conference go ahead and adopt the treaty Thursday without the support of the three countries, saying there was no definition of “consensus.” Delegates then started debating whether this should be done and several countries supported Mexico, but the Russian delegation called the proposal “a manipulation of consensus” and objected.

Kenya said “the will of the overwhelming majority is clear” and when the meeting closes a letter will be sent to Secretary-General Ban Ki-moon with a draft resolution asking the U.N. chief to bring the treaty before the General Assembly for adoption as soon as possible.

Australian Ambassador Peter Woolcott, the meeting chair, suspended the meeting after Iran, North Korea and Syria raised their nameplates signifying their refusal to join consensus. Earlier, they gave speeches outlining their objections to the treaty. Both Iran and North Korea are under U.N. arms embargoes over their nuclear programs, while the Syrian government is now in the third year of a civil war.

When Woolcott reconvened the meeting, all three countries reiterated that they would not join consensus.

Hopes of reaching agreement on what would be a landmark treaty were dashed last July when the U.S. said it needed more time to consider the proposed accord — a move quickly backed by Russia and China. In December, the U.N. General Assembly decided to hold a final conference and set Thursday as the deadline.

U.N. diplomats, speaking on condition of anonymity because negotiations have been private, said Wednesday the United States was virtually certain to go along with the latest text.