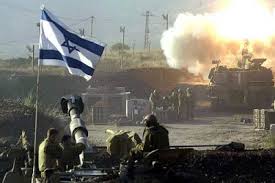 Red lines on cartoon bombs and lines in the sand are nothing more than catch phrases designed to manipulate and coerce.  The Zionists use their 5th column in the United States with its limitless financing to coerce political agreements in the Executive while bypassing the US Congress and thus the people’s represented will.  Obama steps up to the podium and declares a threat of intervention if a so called red line is crossed, with zero authority to do so as the US Congress is the only body with the power to declare war.  And of course the Zionists make sure, through covert black ops, that the lines are always crossed, or at least it appears that they have been crossed.

This scenario, like all of the other Zionist tactics, has been overused to the point that the actions they represent are no longer covert, but easily recognizable by anyone with a little common sense.

Obama states that if the Syrian government uses chemical weapons a red line will have been crossed and predictably, within a very short time, the reports start coming in of chemical weapons being used.  But no one is buying it and all it takes is the smallest effort, and what do you know?

It was the US backed Al Qaeda insurgency that actually used the chemical weapons in Syria, and even that is not true, as in reality, it was CIA Mossad special ops that did the dirty deed.  The reason they couldn’t pull it off is because they cannot operate in areas held by the Assad government, which is pretty much all of Syria at this point, as the US backed Al Qaeda so called rebel forces have been routed.

The Zionists, being the Zionists and in step with their communist brethren here in the US, have done what communists always do when they are losing.  They start blowing up innocent people and blaming it on their rivals in order to get someone else to kill their enemies for them.

There have been three Israeli airstrikes inside Syria.  This is an act of war, yet Assad’s government refuses to take the bait and stands pat, making sure they can be identified as nothing but what they are, the victims of open Israeli aggression for the purpose of capturing land and resources.

Israel’s plans have backfired so they act out as communists with a rash of car bombing in Turkey, which of course are being blamed on the Syrian government, which makes absolutely zero sense.  Why should Assad attack Turkey just has he is defeating the US Al Qaeda forces in Syria?  His military has been weakened and there is absolutely nothing to be gained.

The Zionists, trying to sell the idea of Syria attacking Turkey, contend it is retaliation for Turkey backing the insurgency.  Well, this logic, or lack thereof, would make about as much sense as Syria attacking the United States after regaining control in their own country.  Everything to be lost, nothing to be gained.

No, these bombings in Turkey are nothing more than the international communists throwing a fit, just like the one they threw in Boston in retaliation for the Americans rejecting gun confiscation that was to be perpetrated via the Sandy Hook false flag.

The Israelis are angry because they see themselves losing their ability to start wars for other people to fight through international intrigue and I believe we are going to see an increase in the temper tantrums.  Maybe this is how Zion will fall under its own weight as the people of the world just simply turn their backs on Israel in disgust.

Imagine a people who could foster a hate for other peoples simply because they refused to believe an ongoing lie that has been brought out in the open.

God help the all of the world to finally see Zion for what it truly is.