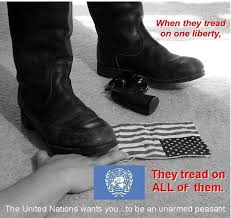 U.S. Rights: As the world body meets this week to hammer out an agreement to restrict international arms trade, our Secretary of State commits us to pushing a treaty that may also restrict our Second Amendment rights.

Last Friday, the day of the week when unpopular or controversial announcements are traditionally made, Secretary of State John Kerry announced U.S. support for the United Nations Arms Trade Treaty (ATT), a final version of which is being hammered out in New York beginning this week.

Certainly the ATT is controversial. Touted as a means of getting a handle on an international arms trade valued at $60 billion a year, its stated purpose is to keep illicit weapons out of the hands of terrorists, insurgent fighters and organized crime at an international level.

Its vague and suspicious wording led some 150 members of Congress last June to send a letter to President Obama and then-Secretary of State Hillary Clinton warning that the treaty is “likely to pose significant threats to our national security, foreign policy and economic interests as well as our constitutional rights.”

We have noted that a paper by the U.N.’s Coordinating Action on Small Arms (CASA) says that arms have been “misused by lawful owners” and that the “arms trade therefore be regulated in ways that would . .. minimize the misuse of legally owned weapons.”

Would defending your home against intruders, or U.S. laws permitting concealed carry, be considered a “misuse?”

“We will not support any treaty that would be inconsistent with U.S. law and the rights of American citizens under our Constitution, including the Second Amendment,” Secretary of State Kerry tried to reassure us — even as he represents an administration that seeks to ban weapons on their scary appearance rather than their genuine lethality, thinks the Founding Fathers wrote the Second Amendment with deer-hunting rather than British tyranny in mind, and would be happy if the entire U.S. were a “gun-free zone.”

As the Heritage Foundation notes, imported firearms, considered part of the “arms trade” to be regulated, constitute about 35% of the new firearms market in the U.S.

“Under the guise of adopting what it deems to be ‘appropriate measures,’ an Administration could restrict imports by redefining what qualifies as a ‘sporting’ firearm — the definition of which is left completely to the discretion of the Bureau of Alcohol, Tobacco, Firearms, and Explosives,” Heritage reports.

The ATT, Heritage warns, “could create a national registry (initially) limited to imported firearms. It could impose new requirements on importers of firearms, or parts and components of firearms, for example, by requiring them to provide the identity of the final end user.. .”