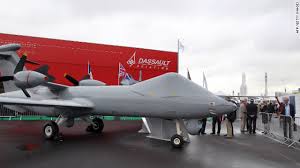 The proposed expansion of the use of unmanned aerial vehicles (UAVs), better known today as drones, by federal, state and local law enforcement, first responders and other agencies, “raises far-reaching issues concerning the extent of government surveillance authority, the value of privacy in the digital age and the role of Congress in reconciling these issues,” a new policy report for congressional lawmakers stated.

The introduction of drones into American airspace raises many legal and policy questions. For instance, how far can the government go in its attempts to maintain security and ensure that laws are enforced? What level of privacy should Americans expect in an age where technology facilitating the acquisition of personal information expands at a phenomenal pace?

“Currently, there is a vast body of Fourth Amendment law that governs the circumstances in which law enforcement must obtain a warrant before conducting surveillance. However, the sheer sophistication of drone technology and the sensors they can carry may remove drones from this traditional Fourth Amendment framework,” Thompson wrote.

The report comes as the Department of Homeland Security (DHS) is conducting a study of a variety of small unmanned aerial system platforms to determine the applicability and practicality of these types of drones for use by law enforcement and other first responders like paramedics and fire-fighters, as well as for homeland security operational communities.

The growth in the use of UAVs for homeland security and other public sector needs “hinges on the Federal Aviation Administration (FAA), which is tasked with finding out how aerial drones can coexist with commercial airlines and comply with the privacy concerns of the public,” according to a new study by National Center for Policy Analysis (NCPA) research associate Evan Baldwin Carr.

“As the use of unmanned drones nears full integration into the National Airspace System (NAS) in 2015,” the NCPA study “urges exploration of the civilian, commercial and scientific applications of drones, while taking into account the many concerns over civilian privacy.”

“Many applications of drone platforms are in some phase of research, development, testing, evaluation or operation, and the industry will likely generate a new wave of entrepreneurs,” Carr wrote.

Another recent study of the economic affects of an impending explosion in the US drone market, conducted for the Association for Unmanned Vehicle Systems International (AUVSI), concluded that the UAS industry could create more than 70,000 new jobs with an economic effect of more than $13 billion in the first three years after the integration of drones into the US NAS.

And this benefit will grow through 2025, when more than 100,000 jobs possibly could be created, with the addition of $82 billion to the economy, according to the AUVSI study, The Economic Impact of Unmanned Aircraft Systems Integration in the United States, by Daryl Jenkins, a former director of the Aviation Institute at George Washington University.

The study argued that “A reviewing court’s determination of the reasonableness of a drone search would likely be informed by location of the search, the sophistication of the technology used and society’s conception of privacy in an age of rapid technological advancement.”

But even though private citizens reasonably expect “substantial protections against warrantless government intrusions into their homes, the Fourth Amendment offers less robust restrictions upon government surveillance occurring in public places, including areas immediately outside the home, such as in driveways or backyards,” Thompson said in his study.

“Concomitantly,” he said, “as technology advances, the contours of what is reasonable under the Fourth Amendment may adjust as people’s expectations of privacy evolve.”

Congress has introduced a number of bills designed to restrict the use of UAVs at home, and several would require law enforcement to obtain a warrant before sending up these unmanned aircraft for the purpose of domestic surveillance, subject to specific exceptions. Still other legislation would require users to first file a data collection statement detailing when, where and how the drone is to be used and how the user will minimize the collection of information protected by the proposed legislation.

According to Thompson, “the relative sophistication of drones contrasted with traditional surveillance technology may influence a court’s decision whether domestic drone use is lawful under the Fourth Amendment.”

Beyond the deployment of drones in and around public places, Thompson wrote, “law enforcement agencies are granted significant deference to conduct surveillance at or near American borders,” where the federal government “has a significant interest in protecting American borders from crossings by persons attempting to enter unlawfully, drug trafficking, and, perhaps most importantly, the transit of weapons and persons seeking to do harm to American people and infrastructure.”

Congress already has granted federal law enforcement agencies significant search and surveillance authorities on the nation’s borders. Immigration officers are allowed to conduct warrantless searches of any vessel that’s at a reasonable distance from any US border and any vehicle 25 miles from a border for the “purpose of patrolling the border to prevent the illegal entry of aliens into the United States.”

Federal Customs officers also are allowed to search vehicles and persons when the officers have reasonable cause to they are attempt to transport contraband into the United States.

“The Supreme Court has likewise acknowledged this federal interest in the borders, observing, “The government’s interest in preventing the entry of unwanted persons and effects is at its zenith at the international border,” Thompson wrote.

Thompson pointed out that, unlike searches directly at the border, courts have “shown more reticence in granting law enforcement unfettered discretion to conduct searches near, but not directly at, the border.”

Ultimately, though, Thompson concluded, despite the “vast body of Fourth Amendment law that governs the circumstances in which law enforcement must obtain a warrant before conducting surveillance… the sheer sophistication of drone technology and the sensors they can carry may remove drones from this traditional Fourth Amendment framework.”

While courts and Constitutional law — and, ultimately, perhaps the Supreme Court — undoubtedly will play pivotal roles in determining who, what, how, when and where drones can be used, Congress and the executive branch may also become embroiled in regulating the many varied uses of the coming swarm of drones.

“As the integration of drones for domestic surveillance operations quickly accelerates, these questions and others will be posed to the American people and their political leaders,” Thompson concluded.