From October 2019 to February 2021 the US M1 Money Supply grew 446%. Don’t worry. The Biden administration and the Federal Reserve have solved the problem. They have announced they will no longer report the M1 Money Supply. This would be like the National Weather Service canceling tsunami alerts because they don’t want beachgoers to worry.

At this rate the US M1 Money supply will have grown 2,000% by Summer 2022 which will give voters something to think about in the 2022 elections.

Joe Biden’s spending plans could increase the Money Supply by more than 2,000% by the summer of 2022. He is spending at a faster pace than Trump. And his spending will not increase real economic activity. Only $153 billion of his $3 trillion “Infrastructure” scheme actually goes to roads, bridges and airports. The actual infrastructure debt is more than $4 trillion. More than $10 trillion if you want guarantee safe drinking water without lead, poisons and radiation coming out of the tap. And if you want a guarantee that the lights will not go out for 6 months to a year in case of untoward events occur, you could a a couple trillion more.

But instead of maintaining America we spent our resources blowing up Afghanistan, Yemen, Iraq and Syria since 911 when we let Israel blow up the World Trade Center.

M1 Money Supply includes cash, checking accounts and traveler’s checks. In 16 months we will learn what foreigners will do to the US Dollar when they see that much inflation. Of course this is by design. Joe Biden and Kamala Harris have the support of most billionaires like George Soros, Warren Buffett and Bill Gates for a reason. All this money printing is part of the Great Reset which the Uber Rich love.

Hint: The US M1 Money Supply is currently growing faster than Argentina’s. 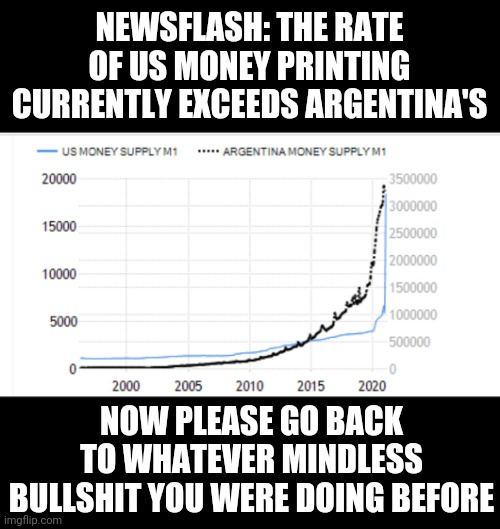 The World Economic Forum at Davos Switzerland tells us by 2030 we will own nothing. We will even be leasing the clothes we wear from billionaires. No homes or cars will be owned by the middle class which will in 9 years disappear by design.

We know that covid was made in a lab. Nobel Prize winner Jean Luc Montagnier of the Pasteur Institute told us so. We have seen mutations of the coronavirus appear that might require the gullible to demand more vaccines and lockdowns. In reality if everyone were told to take Vitamin D-3, we would have fewer deaths than a seasonal flu. And fewer than that if governments threatened doctors’ medical licenses for not using Ivermectin to cure covid.

We might see a lot of long term health consequences from the covid vaccines. I know we will have more mutations and even see a second bioweapon released so the Great Reset can be accomplished. Naomi Wolf tells us that covid sent the world into fascism and that vaccine passports will create totalitarian super states.

Lockdowns shut down economic activity bankrupting small businesses and spreading unemployment worldwide. That is by design because the only way for governments to solve their problems is to quadruple the money supply and then to quintuple it until the money is worth nothing. At the end of the road, Hyperinflation will destroy the life savings, pensions and wages of everyone who has not invested in inflation proof assets. This means everything you worked and saved for will be taken away from you by billionaires by design.

Argentina has had more experience with Hyperinflation than other countries. I remember a journalist describing a formerly middle class family who lost everything to inflation. She saw them going through garbage bins to find things to sustain themselves. They had already sold everything they owned to buy food at hyperinflated prices.

That will be our future if we don’t say No to Lockdowns, Vaccines, Vaccine passports and bioweapons.