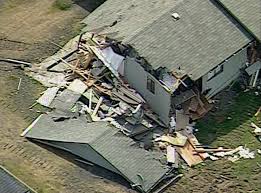 Police in Port Angeles, Wash., have arrested a man accused of stealing a bulldozer and using it to destroy two homes and power lines.

“A person with a piece of heavy equipment that was very upset, struck two homes in the area and also a truck,” Jim Borte with the Clallam County Sheriff’s Department told KOMO-TV.

Borte said one of the homes was partially knocked off its foundation.

Keith Haynes lives near one of the damaged homes and said that the suspect took a piece of logging equipment called a skidder and “just went nuts,” the Associated Press reported. Haynes said a woman inside one of the homes escaped unharmed, and the other home was unoccupied. Haynes said the houses were demolished.

Both directions of U.S. Highway 101 from Milepost 250.07 near Baker Street to Milepost 250.38 near Monroe Road were closed due to police activity around 1 p.m. PST, but were opened within 20 minutes and some lights were restored. A few side streets remain closed, KIRO-TV reported.

Thousands of customers remain without power from east Port Angeles to Sequim, Mike Howe of the Clallam County Public Utilities District said, according to KING-TV.

A suspect is in custody, but his name has not been released.