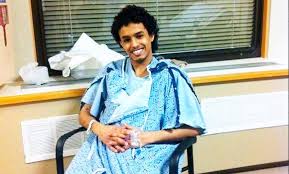 The boy. Abdul Rahman Alharbi. He was here, then he wasn’t.

He was featured in major stories, then he wasn’t.

The Ministry of Truth (controlled media) has no further concerns.

For a few hours, Alharbi was the prime suspect in the Boston bombing. Then he was a person of interest.

Then he was no longer a person of interest, he was severely burned and in the hospital.

Then Secretary of State John Kerry met with Saudi Foreign Minister Saud. Obama met with Saud, too, and with the Saudi ambassador.

Then DHS took away his travel visa and prepared to deport him.

Where is he? Was he deported?

No one seems to know.

Since 2009, though, and long before Michelle Obama visited him in a Boston hospital a few days ago, Alharbi had been to the White House seven times. On several occasions, those visits lasted several hours.

Ten members of the boy’s extended family are named on a Saudi terror list.

According to Glenn Beck, who produced a copy of a form from the US Customs and Border Protection National Targeting Center, Alharbi is designated a 212-3B. This classification translates to: “terrorist connections.” At the least.

The Ministry of Truth doesn’t seem to care what he was doing at the White House.

George Orwell, 1984: “…to forget whatever it was necessary to forget, then to draw it back into memory again at the moment when it was needed, and then promptly to forget it again…consciously to induce unconsciousness, and then, once again, to become unconscious of the act of hypnosis you had just performed.”

Janet Napolitano now says the boy was never really on a terrorist list, he was just on a no-fly list for a few hours, when the FBI thought he might be a person of interest in the Boston bombing.

Then when the FBI realized he was entirely innocent, they took him off the no-fly list.

But changing that 212-3B status of someone has nothing to do with no-fly. It’s more complicated and serious. A panel has to convene, and evidence has to be presented. Worse yet, it appears Alharbi was tagged with 212-3B because of a prior (unnamed) act that had nothing to do with the bombing in Boston.

But, you see, he’s old news, because the Ministry of Truth concurs that the Boston bombing case has been solved.

The following questions, therefore, don’t need to be asked by incurious reporters:

What was Alharbi doing at the White House? Who was he seeing? What did they talk about?

How and why does DHS allow a person with a 212-3B tag to enter the White House seven times?

How and why does DHS allow the president’s wife to meet with a 212-3B?

If DHS is making these designations and categories of threat re Alharbi, why are they reversing their own assessments?

Why did government officials decide to let Alharbi drop from the suspect list in the Boston bombings, only to say he needed to be deported on April 23rd?

Is he still in the US?

The Glenn Beck aspect of this story is interesting. Major media can simply reject everything he says because he’s Glenn Beck. However, Beck was presenting a document on The Blaze. The cover page is posted there, and other reporters could, if they wanted to, substantiate it as genuine or fake, independent of Beck or anything he asserts.

They could find out if it lists Alharbi as a 212-3B, and if it describes him as “armed and dangerous.”

But they don’t. They stay away. They know better than to venture into deep waters without a green light from their editors and producers. Obviously, that green light is red.

“The relationship between America and Saudi Arabia is complex.”

Yes, yes, of course, so let’s forget the whole thing. Let’s drop it down the memory hole and go elsewhere:

The Red Sox are off to a good start.

Former Congressman Anthony Weiner says there may be more penis pictures out there.

CNN is reviving its old show, Crossfire, and Newt Gingrich may be one of the stars.

The polar icecaps are receding, or possibly expanding.

So in bars tonight, and for the next few days, reporters will chew the fat about the Saudi kid, about the interesting story that might have been. But they know they can’t go there.

It doesn’t bother them. They’ve been through this kind of thing many times. They cover what they can cover, and they talk about the rest. “One, two, three, oil…Saudi oil. It’s gotta be about oil, right? Everything is. We’re in the wrong business, boys. We should have gone into shoes or women’s wear.”

At the top of the broadcast ladder, where Brian Williams and Scott Pelley and Diane Sawyer live, the story is dead. Unless someone from upstairs comes down and tells them it’s alive again.

“I was just talking to John Kerry and he says the way DHS handled this kid was strange. He wants to know if we know anything.”

“I just talked to the White House. They say it’s a non-starter. The kid was never a suspect. It was some kind of mix up.”

And the White House, in turn, was just talking to three defense contractors who own half the Senate, and there was a discussion of new Saudi weapons orders:

“Unfortunate confusion with this Alharbi kid. Are the diplomatic channels all clear now?”

Somewhere in America, there’s a reporter for a big paper who’s sitting at his desk in the middle of the night thinking about Alharbi. He knows there’s something there.

He’s wondering how he can cajole his editor into letting him off the leash. Trade one story for another? Promise to train the moron who covers film and can’t string two coherent sentences together?

No, it won’t work. There are red lights and Red Lights and this one burns bright.

Still, it would have been fun. Who knows what foul creatures would have emerged from the swamp?

The lone reporter also knows that all stories are interchangeable; they only last for a little while. A thing is hot, then it’s cold. It’s the way the business works.

Orwell/1984: “…it was not even forgery. It was merely the substitution of one piece of nonsense for another.”

So even if he could dig down past the Saudi kid and find the masses of rotting truth, there would be no traction. It would all slip and slide into the next big thing. And Glenn Beck? Even a blind hog finds an acorn once in a while, but that form he was waving around? Could it really be important? A few of Hillary’s people at the State Department might know something. See what they have to say. All that Saudi money invested in FOX. Maybe Beck’s just trying to get a little revenge on his former employer.

The reporter leans back in his chair. What’s the use? He’ll never make it past the gatekeepers.

Orwell: “Orthodoxy is unconsciousness…Everything faded into mist. The past was erased, the erasure was forgotten, the lie became truth.”

There is another watch list few people talk about. It’s the list of reporters and commentators the elite media refuse to recognize as legitimate, under any circumstances. Glenn Beck is certainly on that list. You can fill in other names yourself.

It works this way. If X, who is on the list, comes up with a true blockbuster of a story, he is ignored, because were he believed and acknowledged, he would move up in official status…and then, other stories he breaks would have to be recognized as well.

And who knows what other stories he would come up with? Surely, some of them would challenge firm boundaries the elite media place on what they will cover and what they won’t cover.

Orwell: “We know that no one ever seizes power with the intention of relinquishing it. Power is not a means; it is an end.”

John King, one of CNN’s stars, may have inadvertently gotten himself mixed up in the Alharbi story. Prior to the FBI naming the Tsarnaev brothers as the Boston bombers, King announced the FBI had a suspect in custody and were ready to announce who it was.

For five minutes, before the FBI realized they were bumping into protected connections that flowed on a much higher level, had they decided the boy was the bomber?

King had two sources, people he trusted, who told him the FBI had an unnamed suspect in tow. So King went with the story on air.

Then, the FBI said there was no suspect. There never had been a suspect.

King bit the bullet and issued a public apology. He said he would be more careful in the future.

Of course, he was fuming. He could have struck out on his own, determined to prove he’d been jacked around. He could have tried to prove the FBI was lying—they really did have a suspect in custody but then somebody far higher on the food chain issued an order to release…Alharbi?

King knows how the game is played. You take your medicine and shut up. You don’t wander off the reservation. You pretend to believe the FBI. You have to. Otherwise, you’ll wind up looking like the Mad Hatter and your own network will dump you out on the street.

“Remember John King? He was a star. But then he tried to prove the FBI was lying. He lost it. He went nuts going after the Bureau, and it turned out he was wrong. There never was a suspect in custody. It was just bad information. CNN had to let him go. It’s a shame…”

King immediately becomes an object lesson for other reporters. You want to stay in the game? Stick your tail between your legs and waddle back to your job. Say you’re sorry, and then on top of that, say that apologizing is your duty to your audience, because the truth is at the heart of the news, blah-blah.

Orwell: “How easy it all was! Only surrender, and everything else followed.”

The elite media have discovered a marvelous thing. The human mind works just like television news. The mind can decide something is important, then decide it isn’t, forget it, and move on.

Unless the owner of that mind is awake.

Television cop shows mirror this situation. Inevitably, after the first suspect is arrested for the crime (at the 20-minute mark, too early for a wrap-up resolution), one detective points out there are still unanswered questions.

The missing gun, the witness who saw another man fleeing from the crime scene, the stained glove on the fire escape.

His partner, a goofball, says, “Hey, there are always unanswered questions in a case. Who cares? We have a confession (obtained under pressure). Call the DA.”

Then, later in the show, the smart cop proves he’s right. The witness and the stained glove are crucial. A different person committed the crime.

The lesson? Keep asking all the questions. Keeping digging.

But that’s only true on television.

You know, the old whipsaw effect.

There’s an app for anything you want. On TV. Inside the bubble.

The author of two explosive collections, THE MATRIX REVEALED and EXIT FROM THE MATRIX, Jon was a candidate for a US Congressional seat in the 29th District of California. Nominated for a Pulitzer Prize, he has worked as an investigative reporter for 30 years, writing articles on politics, medicine, and health for CBS Healthwatch, LA Weekly, Spin Magazine, Stern, and other newspapers and magazines in the US and Europe. Jon has delivered lectures and seminars on global politics, health, logic, and creative power to audiences around the world. You can sign up for his free emails atwww.nomorefakenews.com