Misstep in gun bill could defeat the effort 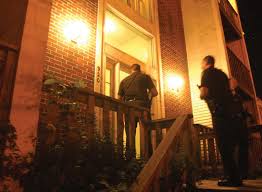 One of the major gun-control efforts in Olympia this session calls for the sheriff to inspect the homes of assault-weapon owners. The bill’s backers say that was a mistake.

Forget police drones flying over your house. How about police coming inside, once a year, to have a look around?

As Orwellian as that sounds, it isn’t hypothetical. The notion of police home inspections was introduced in a bill last week in Olympia.

That it’s part of one of the major gun-control efforts pains me. It seemed in recent weeks lawmakers might be headed toward some common-sense regulation of gun sales. But then last week they went too far. By mistake, they claim. But still too far.

“They always say, we’ll never go house to house to take your guns away. But then you see this, and you have to wonder.”

Responding to the Newtown school massacre, the bill would ban the sale of semi-automatic weapons that use detachable ammunition magazines. Clips that contain more than 10 rounds would be illegal.

But then, with respect to the thousands of weapons like that already owned by Washington residents, the bill says this:

“In order to continue to possess an assault weapon that was legally possessed on the effective date of this section, the person possessing shall … safely and securely store the assault weapon. The sheriff of the county may, no more than once per year, conduct an inspection to ensure compliance with this subsection.”

In other words, come into homes without a warrant to poke around. Failure to comply could get you up to a year in jail.

“I’m a liberal Democrat — I’ve voted for only one Republican in my life,” Palmer told me. “But now I understand why my right-wing opponents worry about having to fight a government takeover.”

He added: “It’s exactly this sort of thing that drives people into the arms of the NRA.”

I have been blasting the NRA for its paranoia in the gun-control debate. But Palmer is right — you can’t fully blame them, when cops going door-to-door shows up in legislation.

I spoke to two of the sponsors. One, Sen. Adam Kline, D-Seattle, a lawyer who typically is hyper-attuned to civil-liberties issues, said he did not know the bill authorized police searches because he had not read it closely before signing on.

“I made a mistake,” Kline said. “I frankly should have vetted this more closely.”

That lawmakers sponsor bills they haven’t read is common. Still, it’s disappointing on one of this political magnitude. Not counting a long table, it’s only an eight-page bill.

The prime sponsor, Sen. Ed Murray, D-Seattle, also condemned the search provision in his own bill, after I asked him about it. He said Palmer is right that it’s probably unconstitutional.

“I have to admit that shouldn’t be in there,” Murray said.

He said he came to realize that an assault-weapons ban has little chance of passing this year anyway. So he put in this bill more as “a general statement, as a guiding light of where we need to go.” Without sweating all the details.

Later, a Senate Democratic spokesman blamed unnamed staff and said a new bill will be introduced.

Murray had alluded at a gun-control rally in January that progress on guns could take years.

“We will only win if we reach out and continue to change the hearts and minds of Washingtonians,” Murray said. “We can attack them, or start a dialogue.”

Danny Westneat’s column appears Wednesday and Sunday. Reach him at 206-464-2086 or dwestneat@seattletimes.com