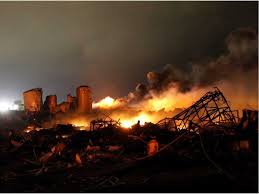 The problem with the theory West Fert Co. exploding so violently is that the factory in question did not stock the commonly used fertilizer, Ammonium Nitrate, which is a solid, prone to exploding (with the proper ignition source) and is widely used by farmers and bomb makers (both the legal and illegal kinds).

What the factory did stock was Anhydrous Ammonium, a gas, that is less volatile and, when ignited, LESS LIKELY to explode with such force as seen at the West plant.

Is Anhydrous Ammonia flammable or explosive?
Anhydrous ammonia is classified by the Department of Transportation as nonflammable. However, ammonia vapor in high concentrations (16 to 25 percent by weight in air) will burn. It is unlikely that such concentrations will occur except in confined spaces or in the proximity of large spills. The fire hazard from ammonia is increased by the presence of oil or other combustible materials. Ammonia will combine with mercury to form a fulminate which is an unstable explosive compound

What is Anhydrous Ammonia?

• Symptoms can include breathing difficulty; irritation of the eyes, nose or throat; burns or blisters.

• Exposure to high concentrations can lead to death.

• It must be stored at high pressure, according to the University of Minnesota.

• It is a low-cost, highly effective nitrogen-based fertilizer, the University of Arkansas said.

• It is one part nitrogen and three parts hydrogen.

-CONTINUE
You be the Judge?
Lord Lord help us IF this is a missile. TPTB’s cheese has done slid off it’s cracker Folks!

The bullet whiz sound just prior to the boom reminds me of the Air Show when the Blue Angels do the sneak attack low fly over extremely fast..
They sound like Bullets whizzing by and they are long gone, out of sight, then the jet engine sounds behind them hit you and rattle your bones. It was an Unforgettable experience.. I will never forget that bullet-like sound. That is what made me download this video and slow it down.

And That BULLET WHIZ sound just prior (split second) sounds EXACTLY like those Blue Angels jets (in this case a Missile(?)) from the air show I attended.

I honestly do not know, but it would be nice for someone (military) WHO HAS heard many missiles up close to chime in.
And with a missile the Flash of light from the left is all you would see.
Hellfire fly Mach 1.3 and this seems much much faster to me…

REDO OF Original But, better repeating of bullet whizzing sound and flash from left  split sec before boom.

@6:49 minutes into this listen what they say

INTELHUB: Texas Explosion Might Have Been Triggered by Militarized Blast, Eyewitness Says ‘It Was a Plane’ – SCROLL DOWN FOR LINK TO IntelHub

After reading comments…
The flash from the left is high up and goes left to right toward the fire. There is nothing burning to the left to ignite “flamable smoke” and in-turn cause the explosion. A few experts need to analyze this.. A respected (Non-FOX affiliated) expert. *laugh*
It is too fast to be a missile IMO.. But something high left enters making that sound and flash.. And then BOOM!

Good morning,
After reading all the comments this morning, why must people be insulting to one another? If you can not be polite in your rebut try saying nothing at all.
IMO.. The supersonic gas is a good possibility that made the “bullet whip” sound.. The question still remans what ignited it so high up and so far to the left? Other videos show one fire.. There was nothing that would have ignited “flamable smoke” high and to the left. The light flash clearly came in from upper left toward the single fire.
What ignited the “fumes?”

I just read some about said “explosive poop” and the production process seems relevant to it possibly being supersonic gas. Again.. IF NOT a Missile… What could have ignited it far and upper left?
I hate (Reason 1, 2, etc.) using ZionPedia – Details: http://en.wikipedia.org/wiki/Ammonium_nitrate

ADDING: Said Poop Factory has a pending Lawsuit with Monstano (HERE). “THAT” seems like it could possibly be Motive???
Monsanto has CLOSE relations w/BlackWater (HERE) too, and as we know,  those both are Psychos capable of anything.

ADDING: Comments about the “Rolling Shutter”.
I’ve read up on this and IF a rolling shutter would not the flash be vertical or horizontal as the shutter worked and not as a flash at a downward angle from upper left?
http://en.wikipedia.org/wiki/Rolling_shutter

NOTICE THE WIND DIRECTION
If ignited fumes coming from something leaking on the left. How could the fumes blow against the wind and what was leaking?