Residents of Eureka, California are reporting of multiple arrests this evening during the wildly successful “Overpasses for Obama’s Impeachment” campaign (a campaign in which literally 10s of people have participated by waving signs on highway overpasses promoting the impeachment of President Obama).

Early reports indicate that protesters were verbally and physically abused prior to being arrested.  All 6 protesters taking part in the rally are currently in police custody.  County and city officials in the area have not yet released a statement on the event or the names of those arrested.  Communications have been difficult and local media outlets are scrambling for more details. 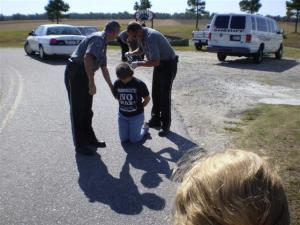 Passing motorists stated that the arrests took part at the 101/255 exchange just North of downtown at around 7:45pm PST.  Local resident Artie Campbell was driving home with his family when 8 police cars drove past him and stopped on the 255 bridge.  Artie had this to say of the incident, “I haven’t seen anything like it in my life.  The protesters seem to have been minding their business and those police officers did not appear to be local guys.”  When asked to describe the victims, Mr. Campbell replied “two of them were older ladies and one of them appeared to be a teenage boy.  The other three were heavier set middle-aged white men.”  According to Campbell, the officers were taking turns ridiculing the victims and at one point even pepper-sprayed two of the older men before placing them in flex-tie restraints and escorting them to nearby squad cars.  Artie referred to the scene as “modern-day fascism” and suggested the officers may have been federal agencts sent directly from the Obama Administration in an attempt to silence opposition.

The campaign, organized by overpassesforobamasimpeachment.org, has just one simple goal, “The removal of the corrupt and criminal President of the United States of America, Barack Hussein Obama.”  Multiple state branches of the organization have formed and membership is growing steadily.  Their largest event, held in early July caused a 10 minute delay in traffic in the Los Angeles area and reports of todays protests from across the country continue poring in this evening.

Chase Logan is a graduate of Georgetown Law and current Washington insider. Chase works the Hill tirelessly in search of the next “Big Scoop” and has been the first to break some of the most salacious of DC stories from sexual indescretions to executive cover-ups. Beginning his political career in high school, Chase has been pursuing truth in politics since his early days at the Young Republication National Federation. Connect with Chase at https://www.facebook.com/chase.logan.9469

View all posts by Chase Logan →