North Korea threatens to attack US air bases in Pacific 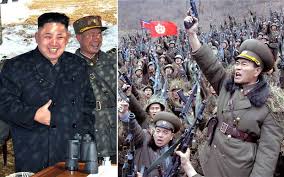 North Korea is threatening to attack American air bases on Guam and the Japanese island of Okinawa in response to a series of military drills involving the U.S. and South Korea.

The U.S. Air Force has been flying B-52 bombers, which are capable of carrying nuclear weapons, over the Korean Peninsula.

“The U.S. should not forget that the Anderson Air Force Base on Guam, where B-52 bombers take off, and naval bases in Japan and Okinawa where nuclear-powered submarines are launched, are within the striking range of the Democratic People’s Republic of Korea precision strike means,” read a statement from Kim Yong Chul, the spokesman of North Korea’s army.

Pentagon spokesman George Little said Tuesday that the B-52 drills show a commitment and ability to defend South Korea from the North, Sky News reports.

North Korea has been increasing its anti-U.S. rhetoric after the United Nations imposed harsh sanctions on the country over its nuclear program.