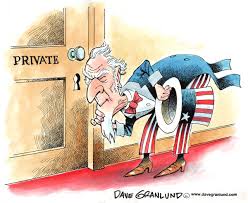 It was revealed last week that billions of correspondences between American nationals are being recorded and stored each and every day, and in fact this warrantless random gathering of information has been going on since 2011.  Now, having been caught in these acts of sedition, the soviet insurgency is actually attempting to defend their crimes through a smorgasbord of irrelevant excuses.

The NSA says it was operating with Congressional Oversight.  I guess this would mean that an act of treason is somehow lawful because a handful of traitors in the Congress were in on it.  And did this violation of the 4th Article to our Bill of Rights stop as soon as it was discovered?  Oh no, it seems there is a whole new kind of animal here, called ‘too corrupt to be prosecuted’, in fact too corrupt to even so much as be questioned.

US Communist Premier Obama, when confronted on this domestic spying program, simply said, “We cannot have 100% security and 100% privacy”.  So I guess what we get is 0% security with 0% privacy as I do not feel secure knowing that secret agencies are spying on me 24/7.

The communists declare that they are just gathering the information and have no intention of looking at it.  And of course we can believe that, right?  This government wouldn’t lie to us, would it?

The new data storage facility in Utah will be going online soon, creating a central hub for our private information to be distributed internationally, and no, data mining for commercial purposes is not the key reason for this domestic spying program.  It works like this.  A patriot begins causing the communist insurgency problems so they are targeted.  This new spying system is then used to get an ex post facto search warrant from the FISA Court to essentially start listening to your every communication, clear back before you were ever a suspect, hence targeted.

The acts of treason against we the people are becoming more numerous and more blatant, literally day by day.

Remember, after the discovery of the derivatives fraud, many Americans were expecting the perpetrators of these blatant crimes to be arrested and brought to justice.  It was simple prima facie mass fraud and theft.  But no one was arrested and no one went to jail.  The only thing this insurgent government did was indebt the American people for the next four generations to pay for the fraud that was committed against them.

Thus, do not expect any legal actions in reference to this latest round of blatant in your face treason.  The soviet insurgents are in charge of the mechanisms and are not going to prosecute themselves.  Therefore it is the duty of we the people via our Declaration of Independence to remove this illegitimate government and see the perpetrators of these crimes, not only against we the people, but against humanity as a whole, brought to justice.

God help us to have the courage to right the wrongs.