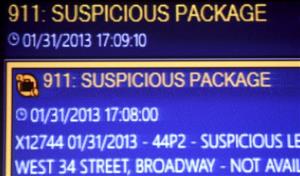 A 911 call comes in about a possible bomb in lower Manhattan and an alert pops up on computer screens at the New York Police Department, instantly showing officers an interactive map of the neighborhood, footage from nearby security cameras, whether there are high radiation levels and whether any other threats have been made against the city.

In a click, police know exactly what they’re getting into.

Such a hypothetical scenario may seem like something out of a futuristic crime drama, but the technology is real, developed in a partnership between the nation’s largest police department and Microsoft Corp., and the latest version has been quietly in use for about a year.

The project could pay off in more ways than one: The NYPD could make tens of millions of dollars under an unprecedented marketing deal that allows Microsoft to sell the system to other law enforcement agencies and civilian companies around the world. The city will get a 30 percent cut.

Right now, it is used only in NYPD offices, mostly in the counterterrorism unit. Eventually, the system could supply crime-fighting information in real time to officers on laptops in their squad cars and on mobile devices while they walk the beat.

“It works incredibly well,” said Jessica Tisch, director of planning and policy for the counterterrorism unit.

For example, officers used the system during a deadly shooting outside the Empire State Building in August. Dozens of 911 calls were coming in, and it initially looked like an attack staged by several gunmen. But officers mapped the information and pulled up cameras within 500 feet of the reported shots to determine there was only one shooter.

Analysts are cautious about the potential profits, saying that largely depends on Microsoft’s sales efforts and whether any major competition arises. While there other data-drilling products made by other companies, they say the NYPD’s involvement could set the dashboard apart.

“This is the kind of stuff you used to only see in movies,” said analyst Rob Enderle of Enderle Group, a technology analysis firm. “Getting it to work in a way that police departments can use in real time is huge.”

The venture began in 2009 when the NYPD approached Microsoft about building software to help mine data for the Lower Manhattan Security Initiative, a network of private and public cameras and other tools monitored by the department’s counterterrorism bureau. Development cost the department between $30 million and $40 million, officials said.

“Usually, you purchase software that you try to work with, but we wanted this to be something that really worked well for us, so we set about creating it with them,” said Richard Daddario, the NYPD’s deputy commissioner for counterterrorism.

Officers were involved throughout the process with the programmers, offering advice on what they need during an emergency.

“It was created by cops for cops,” Tisch said. “We thought a lot about what information we want up close and personal, and what needs to be a click away. It’s all baked in there.”

The system uses hundreds of thousands of pieces of information. Security camera footage can be rewound five minutes so that officers can see suspects who may have fled. Sensors pick up whether a bag has been left sitting for a while. When an emergency call comes in, officers can check prior 911 calls from that address to see what they might be up against.

Prospective clients can customize it to fit their organization.

Dave Mosher, a Microsoft vice president in charge of program management, said the company started to market the system in August and is looking at smaller municipalities, law enforcement agencies and companies that handle major sporting events.

He would not say whether any clients have been lined up and would not give details on the price except to say that it would depend on how much customization must be done.

Shawn McCarthy, an analyst with the research firm IDC, described the partnership _ and outcome _ as unusual in the tech world. “I see huge potential, but so much depends on the price and competition,” he said.

No firm timetable has been set on when the dashboard will be rolled out to the entire 34,000-offficer department.