NYPD officer busted for spying on his stepdaughter for sexual pleasure: court documents 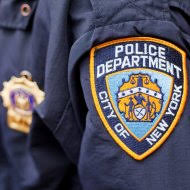 The cop busted for spying with a surveillance camera was actually peeping on his own stepdaughter for sick sexual gratification, officials revealed Monday.

Officer Miguel Gomez, 41, secretly watched the 21-year-old getting dressed and having sex between May 28 and July 15 in the home she shared with the cop and her mom in the Bronx, according to court papers.

Gomez, who has been on the force eight years, was arraigned in Bronx Supreme Court Friday on three counts of unlawful surveillance.

He was released without bail, but barred him from contact with his stepdaughter was issued.

Gomez could not be reached and his lawyer did not return a call for comment.

Gomez wasn’t the only cop to land in hot water over the St. Patrick’s Day holiday weekend.

Mosquera was charged with driving while intoxicated and refusing to take a Breathalyzer test.

• On Sunday, Officer Joseph King, 28, was arrested after allegedly crashing his 2006 Acura into a parked vehicle on the Brooklyn-Queens Expressway near 49th St. in Astoria, Queens, about 4:25 a.m.

Two women in the other vehicle were hospitalized for pain to their neck, back and legs.

King, who prosecutors say had an open bottle of Bacardi rum in his car, was arraigned on charges of driving drunk and leaving the scene of an accident.

He was arraigned Sunday on a drunken driving charge and released without bail.

6 thoughts on “NYPD officer busted for spying on his stepdaughter for sexual pleasure: court documents”